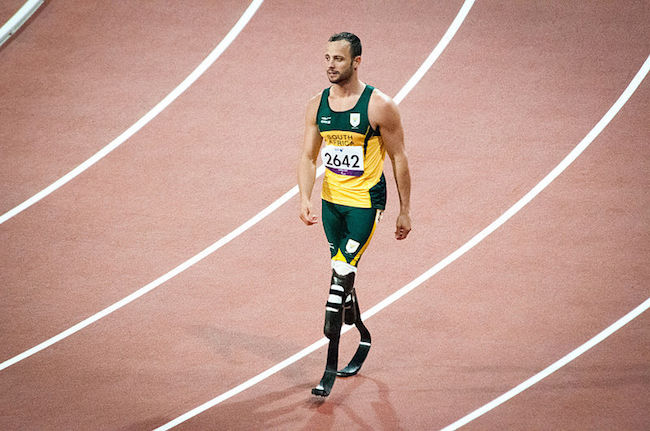 Police may have helped steal expensive watches from the crime scene of murder suspect and Olympian Oscar Pistorius, reported the New York Daily News on Friday. The South African sprinter is accused of shooting to death his then-girlfriend on Valentine’s Day of 2013. The defense has accused police of sloppy work and are now claiming that the crime scene was significantly molested by police investigating the grisly incident.

The trial in Pretoria, South Africa has been a sensational one. Dubbed the “Blade Runner” owing to his having two prosthetic legs, he has admitted to killing his girlfriend, Reeva Steenkamp. He claims that he mistook her for an intruder who was hiding in his bathroom.

According to The Public News Hub, numerous photos taken by police during the murder scene investigation have prompted defense lawyers to question not just the competence of the police but individual members’ integrity. One officer who has since retired, Gillian van Rensburg, was said to have been the first investigating officer at the crime scene. Allegations that he may be responsible for sloppy work, mishandling the evidence and even theft of the watches appear to have made the prosecutor’s job much harder.

Photographs taken by police show many items at the scene in different positions. Some of the photos that got the most attention were those of the watches that the defense claim police did indeed steal. Initial photos showed seven watches and later ones showed just four watches. Despite alleged searches of police personnel, their bags and cars, the watches have yet to turn up.

The other photos that got the most attention were those of “Blade Runner” Oscar Pistorius at the scene. Covered in blood, shirtless and standing in his “blades,” the suspect is shown to have tattoos of a biblical verse as well as the date of his mother’s death.

The latest trial day also had the suspect relatively sedate. Earlier this week, on day six. when the photos of the deceased Steenkamp and her blood all over the bathroom were shown, Oscar Pistorius vomited into a bucket as he sobbed aloud. That day, prosecutors revealed that the bullets fired were hollow points meant to inflict the maximum amount of damage, and the photographs shown were gruesome.

The company that makes the blade-like appendages, Ossur, is based in Iceland and until this weekend had sponsored the former London Olympics runner via an advertising contract. It is unknown why the company waited so long to make the cut, but it has been widely implied that this week’s release of gruesome murder scene photos may have prompted the action.

Whether the police did steal the watches and despite the claim that Oscar Pistorius thought he was shooting at an intruder, prosecutors claim that the runner hit Steenkamp in the back with a cricket bat, chased her into the bathroom, shot through the door and then beat the bathroom door with the bat. According to the UK-based Independent, they claim that he was on his stumps when he carried out the acts and that bullet holes and bat marks on the door correspond with his shortened height.