Divergent: Being Different Can Be Murder (Review) 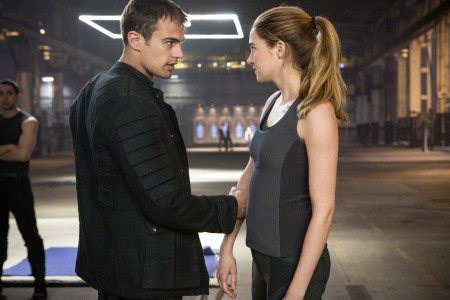 In the 2014 science fiction film Divergent, being different can be murder…literally. Adapted from the novel by Veronica Roth and the beginning of a trilogy, this film is yet another look at a post apocalyptic world where control and conformity are the key to survival.

In this dystopian world, Chicago is the place where people are protected and fenced off from a hostile world. The city is scarred from prior battles and the populace have been separated into five different factions. These are Erudite – thinkers, Abnegation – givers, Amity – peaceful, Candor – honest and Dauntless – warriors. This five faction society also has one other section of humanity. The Factionless who are outcasts and belong to none of the allowed factions.

Children in this cog-like world, where everyone fits into one faction or the other, are forced to pick their chosen place in society based upon an aptitude test and their own feelings. Once chosen, a faction can never be rescinded and if their family is part of another faction they must leave them behind. On their 16th birthday each child undertakes this “rite of passage” and enters the adult world, no longer dependent upon their parents.

Beatrice and her brother Caleb are part of Abnegation, the givers, in this world. This faction are the public servants of the city and do the day to day running of the government, in other words, the public servants of this post apocalyptic verse. When she goes in for her aptitude test, Beatrice scores highly in three areas, which is not allowed. Her test administrator instructs the girl to tell no one and it is explained that the young Abnegation faction member is a Divergent. Something that can have deadly consequences for the individual possessing this trait.

On the day of choosing their destinies, both Caleb and Beatrice opt to leave their family’s faction. Caleb joins the Erudite and his sister joins the Dauntless. She must hide that she is a Divergent because being different to such a huge extent means that she will be murdered. Individuality is not something this war-torn world values. Not fitting into the realm of a cog-like existence threatens those in charge, or more importantly, the law making Erudite who are the legal representatives of Chicago.

This “near future” science fiction action/adventure film is rated PG-13 and under the guidance of director Neil Burger (The Illusionist, The Lucky Ones) it moves along at a decent pace and has an almost perfect mix of action and humor with just a dash of romance thrown in. The film also puts across the message that those who make the laws are the most ready to break them.

Fans of the book may notice that some things have been changed between page and screen, but that is to be expected. This is, after all, Hollywood and poetic license is the name of the game when it comes to adapting books to film. Screenwriters Evan Daugherty and Vanessa Taylor have not lost the theme of the book and the movie works extremely well in pleasing not just the targeted teen audience.

While the film is all about being a teenager and the protagonist finding out that she really is different from almost everyone, older audiences can enjoy the film as well. Attending an advance screening today, the audience’s age groups varied and the response to the film was, overall, very good. At the end of the movie, the crowd broke into spontaneous applause, although that could have been for the actor’s performances more than the film itself. To be honest, however, both were satisfying and enjoyable. Not one moment of the movie could be called slow or boring.

In terms of plot it is not blazingly different. The future, according to a lot of films right now, is not bright. It will be regimentally controlled, hostile, and society will be radically different than it is today. However, the film looks at a future not full of mysticism or spiritualism, but one of technology gone wrong. Where the law givers definitely cannot be trusted and nonconformity will result in death or banishment.

The actors in Divergent all performed brilliantly. Shailene Woodley as Beatrice, and later Tris, could well be the next Jennifer Lawrence. Her performance was spot on and believable. This young lady breathed life into her role and helped to make the whole thing that bit more believable.

Mad props should also go to Theo James, an “Englishman in Chicago,” as the tough and slightly mysterious Four; Jai Courtney, from “down under,” steps into the shoes of baddie very well considering he was Bruce Willis’ offspring in A Good Day to Die Hard. Special mentions need to made for Zoë Kravitz, Ashley Judd, Maggie Q and a tip of the hat to Kate Winslet for playing so well against type.

Kudos should also go out to the CG team who made a blasted and deteriorated Chicago look so real. The lighting for the film was not dark as so many futuristic movies are. In this instance the only thing dark was the plot and not overly so either. A lot of amusing things happen in the movie showing that while the future may be unpleasant at least the inhabitants have held on to their sense of humor.

The cinematography is crisp and clear. The only minor complaint could be with the score. Some of the music did not feel like a good match to a couple of scenes. Although overall it was appropriate and gave added dimension to the events unfolding on screen.

The cinema audience connected with Shailene’s and Theo’s characters fully and while their film counterparts are part of a much darker world, their personal careers look to be very bright indeed. In Divergent, being different can be murder if you are found out. However, this film’s message is one of hope for those younger folks who feel that they don’t fit in. While not on the same level as The Hunger Games franchise, Divergent should please most audiences, it certainly proved popular with the advance screening crowd and the movie is well worth the price of a cinema ticket. The film opens on March 21 across the U.S.

3 Responses to "Divergent: Being Different Can Be Murder (Review)"