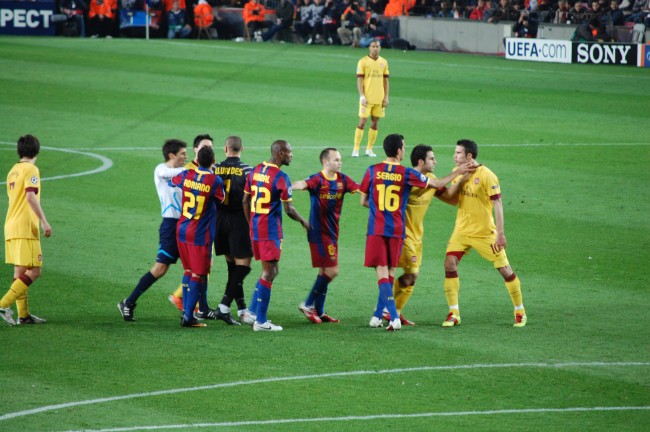 Lionel Messi became the top scorer in club history today for FC Barcelona as they routed Osasuna by a score of 7-0. Scoring a hat trick Messi topped Paulino Alcantara’s record of 369 goals in a Barcelona shirt and pushed his own total to 371. The emphatic win came at the exact right time in the season, as they will face Real Madrid in El Clasico a week from today.

Lionel Messi has already become a club legend for Barcelona winning four straight Ballon D’ors and bringing them two Champions league titles in three years. This just further solidifies his pace in club lore, as he becomes the leading scorer for one of the most historic clubs in football history. 371 goals is an incredible amount and the Argentine shows no signs of slowing down in the goal-scoring department. Including the goal he scored midweek in the Champions League against Manchester City Messi now has four goals in his last two matches.

Messi and Barcelona’s recent run of good form has come at the perfect time in the season as they are four points back of Real Madrid in La Liga and awaiting the draw of the Champions League to see who they will face in the quarterfinals. After dropping points against Real Valladolid last weekend in a 1-0 loss Barcelona are behind not only Real but also Atletico Madrid in the league. They still get to play both teams before the season ends, Real Madrid next weekend and Atletico Madrid in the final week of the La Liga season. All three teams at the top of the table are still alive in the Champions League so none of them will have the advantage of resting players when the others are playing.

Real Madrid have been on a tear all season and it seems they, like Barcelona, are playing there best at this point of the season. Yesterday they beat Malaga 1-0 to stay atop the table with another goal from Cristiano Ronaldo who is the leading scorer in La Liga. Madrid have not lost in La Liga since October when they were defeated 2-1 in the Nou Camp. Barcelona will have the advantage of rest going into next weeks Clasico as they have already played their Champions League last 16 matchup and Real Madrid still have to finish off Schalke midweek. Madrid have a 6-1 lead and will not need their top players to defend a five goal lead so that will help set up an absolute stunner of a match on March 23 between the two Spanish powerhouses.

Lionel Messi and Barcelona are playing extremely well right now and showed it today beating Osasuna in a rout 7-0 on the back of a Messi hat trick. After being labeled as past his prime earlier in the year Messi has made it his mission lately to remind everyone that he is the best player in the world, and he did that today by becoming the all time leading scorer for one of the best clubs in the world. Next Sunday will be an El Clasico for the ages as both teams are playing very well and their two best players Messi and Ronaldo are both in fine form.