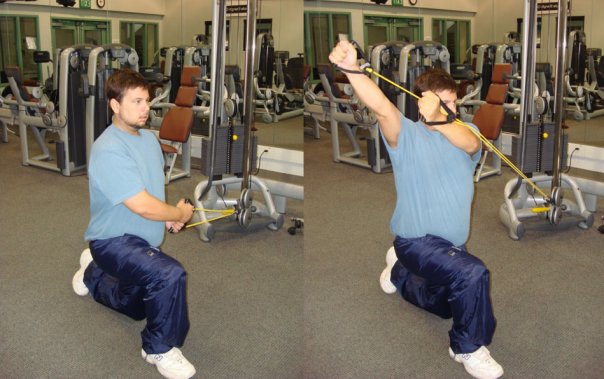 Hypertension and strength training can go hand-in-hand, according to a recent scientific review, which brings good news to those who may have once thought that lifting weights was bad for those with high blood pressure. Because strength training raises a temporary spike in blood pressure, the American Heart Association recommends that those with blood pressure higher than 180/110 millimeters of mercury (mm Hg) should not lift weights or perform high-intensity exercise, especially if it is not controlled. Although there are not many studies to correlate the effects of strength training and hypertension, current evidence shows that lifting weights could be as beneficial as other forms of exercise, such as steady-pace cardiovascular training, as long as the exerciser can handle the intensity and manage their blood pressure.

Perhaps the answer to whether strength training is good or bad for hypertensive people lies in exercise intensity, not so much the modality of exercise. A recent research from São Paulo State University showed that high-intensity exercise can better reduce high blood pressure in the short-term than steady-pace aerobics. High-intensity exercise training was performed in bouts of one to four minutes with short periods of rest in between, while continuous aerobics was performed at a moderate intensity for about 30 minutes or more, according to Emmanuel Gomes Ciolac, Ph.D, who performed the study. Even though subjects who performed high-intensity exercise had a much lower blood pressure than the other group, this doesn’t mean everyone with hypertension should bolt for the gym and work out like Rocky Balboa. Ciolac found that the long-term effects of improved hypertension risks were almost equal when both groups of subject were re-evaluated at the end of the study. However, he also found that the group that performed the high-intensity training performed better in a graded exercise test than the group that performed steady-pace aerobics. It is very likely that exercise intensity and type should be based on the individual’s preferences and risks rather than suggesting a general, cookie-cutter exercise program for certain populations.

Hypertension should not be the reason why anyone should discontinue strength training because the good side-effects outweigh the bad.  Almost any type of exercise can be performed at a high intensity, such as kettlebell swings, barbell squats, box plyometrics, medicine ball throws, and old-school pushups and pullups. For those with high blood pressure, Mayo Clinic recommends that they should start with lower intensity before increasing any higher, and learn proper form and breathing techniques to reduce the risk of injury. Those with a blood pressure between 140 to 170 mm Hg systolic or 90 to 109 mm Hg diastolic should check with their physician between doing any strength training.

Hypertension and Strength Training: Good or Bad? added by Nick Ng on March 30, 2014
View all posts by Nick Ng →