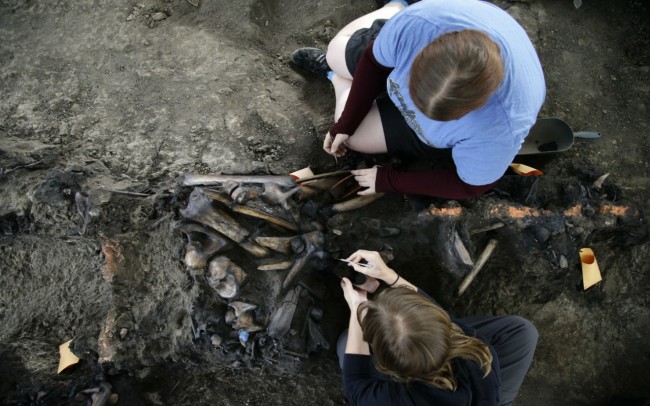 Ice Age fossils uncovered during Los Angeles subway dig in preparation for Westside  line extension. At depths of 40 feet palaeontologists estimate the age of fossils to be around 50,000 years old, deeper than that they expect finds to date back at least 330,000 years, a time when the world was deep in the last great Ice Age. A host of creatures have been pulled from the ground, including ancient sand dollars, snails and the mouth of what looks like a sea-lion ancestor dating back two million years. The finds were not entirely unexpected, as the area is close to the famed La Brea Tar Pits, which claimed the lives of hundreds of Ice Age animals, sealing them in ancient oil and preserving their bones.

During the Ice Age the dig site was right on the beach of a much colder and wetter California. Dire Wolves, Sabertooth Tigers, and massive Wooly Mammoths once roamed in neighbourhoods now characterized by restaurants and boutiques. The dig work is being carried out by palaeontologists from Cogstone Resource Management under the leadership of Kim Scott. Cogstone and the L.A. Metropolitan Transport authority are working together with the George C Page Museum to ensure that all of the Ice Age fossils are carefully excavated, packed, and moved so as to ensure that these shards of history can be preserved and the planned expansion can go ahead as scheduled.

Although the site of the dig is now six city blocks inland and covered in residential construction, it was once right on the edge between land and sea and likely covered in grasslands and tundra. The area was rich in animal life, as evidenced by the discovery of a nearly complete Columbian mammoth skeleton during bulldozer work several years ago while building an underground garage. With tusks 10 feet long, the discovery was as shocking as saving the specimen was fortunate. This new batch of Ice Age fossils uncovered during Los Angeles subway dig highlights the concentration of discoveries in the area that are possible for those who are able to dig deep enough. A depth of 40 feet is nothing to sneeze at, but one can’t help but wonder what else may be lying beneath Santa Monica Boulevard.

As the dig continues, the shaft has reached a size of 20 by 40 feet, with the composition of the soil pointing to a past climate that was much wetter and colder than current Californians would be comfortable with. As well, the palm trees that now line the streets were at one time dominated by pine and cypress, several petrified Monterey cypress cones have been found, as well as several pieces of driftwood.

Construction of the Westside subway extension is set to begin in earnest in the coming weeks, meaning that the Ice Age fossils uncovered during the Los Angeles subway dig are being excavated, cataloged, and moved to the George C Page Museum as quickly as possible. They will likely undergo more careful scrutiny once there is time to move more slowly.