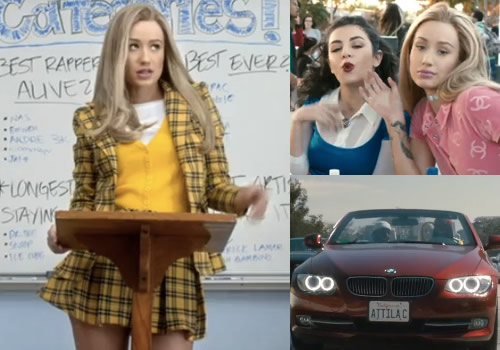 Iggy Azalea plunged into full Clueless character when releasing the video Fancy March 4.  The rapper revealed her adoration for the ’90s hit film Clueless, by effectively recreating the film in the video.  The ’90s provided the mainstream threshold for hip hop as a top-contending genre.  With the increased recognition, movies and television followed suit infusing programs with bits and pieces of the hip hop culture.  The movie Clueless starring Alicia Silverstone, Stacy Dash, and Brittany Murphy was no exception.

Clueless was released in 1995, jump-starting the tween movie epidemic that continues to brand entertainment some 20 years later.  Clueless follows several privileged teens who attend high school in Beverly Hills.  Alicia Silverstone and Stacy Dash portray the characters of two over-entitled popular teens.  Silverstone and Dash illuminate the characters of Cher and Dionne.  The two characters are high fashion, rich, popular and run the high school with a genuine kind heart.  Brittany Murphy is introduced as Tai, the diamond in the rough that Cher and Dionne attempt to transform.  The three are surrounded by supporting characters who contribute to the hilarious drama that engulfs them all:  the love interest who is really not all that interested, the parent who is always working, the annoying sibling, rivaling enemies, and the token individual engulfed in hip hop culture.  These components band together and form an uproar of comedy that sets the stage for the infiltration of teen comedies and dramas.

Iggy Azalea and Charli XCX unite to recreate the ground-breaking comedy in the three-minute video Fancy.  Charli XCX is a youthful, fun, fresh performer from the U.K.  The English singer debuted True Romance, her first album released with a major label, in April 2013.  Charli’s single Super Love is currently circulating, awaiting the release of her follow-up album this summer.  XCX’s rock/pop style paired with Azalea’s model hip hop swagger are a cocktail of success to sip on.  The two were able to incorporate the most minute details into the video successfully. Stating that the wardrobe scenes identically matched in comparison to the movie would be a massive understatement.  The infamous plaid blazer skirt suits Cher and Dionne sport in the beginning scenes were absolutely nailed in the video.

Azalea adopted the role of Cher and harnessed the plaid ensemble while XCX took on the character underdog, Tai.  They pranced from clip to clip mimicking freeway, classroom, and gym scenes from the movie.  XCX’s vocals add an essence of Gwen Stefani to the track, giving Fancy a Let Me Blow Your Mind-type feel.   Let Blow Your Mind is a single Gwen Stefani and hip hop artist Eve collaborated on and released in 2001.  XCX’s sexy rock dominance merged with Azalea’s classy-chic urban edge adds a modern-day Gwen Stefani-Eve ambience to the track.  Azalea is boldly making her mark in the successful collaborations market.  She has also donned the stage with T.I.  with the release of Change Your Life.  Azalea adapting Clueless in order to launch Fancy has generated colossal curiosity for the The New Classic album, to be released April 14.

2 Responses to "Iggy Azalea Does ‘Fancy’ the ‘Clueless’ Way"