Italian Futurism at the Guggenheim 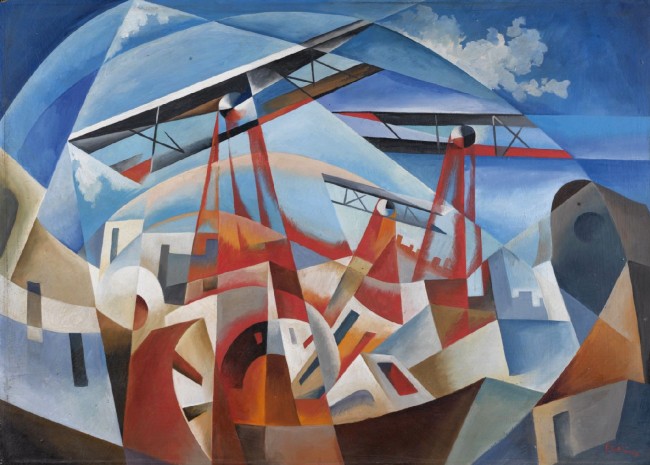 The Guggenheim Museum presents Italian Futurism, 1909-1944: Reconstructing the Universe until September 1, 2014. It is the first comprehensive overview of the influential art movement ever to be seen outside of Italy. More importantly, the Guggenheim exhibition surveys the movement in its entirety from 1906 until the early 40s.

Highlighting more than 360 works from architects, artists, photographers, designers and writers, the exhibit investigates the historical scope of Futurism from its origin with Marinetti’s first Futurist manifesto, published in the 1909 French newspaper, Le Figaro, to its departure at the end of the Second World War. The show examines everything from advertising and design to painting, sculpture, architecture, film and photography, music and theater.

Presented chronologically, Italian Futurism juxtaposes artworks in various mediums as it evolved. It begins with an examination of the manifesto as an art form and follows the movement’s confrontation with Cubism in 1911. Visitors track the movement’s progression as it extends to include other art forms such as clothing, dinnerware, experimental writing, and even toys.

Often antagonistic and controversial, Futurism advocated avant-gardism and revolution, and was sometimes associated with Fascism. Founded by Filippo Tommaso Marinetti, the movement was inundated with philosophies and platforms, almost fanatical with war, machines, speed and flight. It is said to have two stages. The first, Heroic Futurism, survived until approximately 1916, and a manifestation that ascended after the First World War until the early 40s.

Launched against a backdrop of growing economic and social upheaval, Marinetti’s first manifesto defined the movement’s fundamental objectives, which included eliminating the past, campaigning for modernization and praising aggression. Strong in its intent, the manifesto urged “scorn for women,” and vowed the obliteration of “museums, libraries, academies of every kind.”

At its inception, it was a literary movement. However, Italian Futurism soon incorporated the visual arts as well as fashion, advertising, theater and music. It extended throughout Italy and beyond, with over 2,000 persons connected to the movement over its duration. Important figures included artists Umberto Boccioni, Fortunato Depero and Carlo Carra; photographers Guglielmo (Tato) Sansoni and Anton Giulio Bragaglia. These artists and others are also represented in the exhibition.

The crossroads of the movement came possibly in 1915, with Fortunato Depero, who co-wrote a manifesto with composer-painter, Giacomo Balla, called Futurist Reconstruction of the Universe. It was centered on the philosophy of the “liberation of media and exploration of senses.” The two artists sought to grasp a “total fusion” with the aim of “reconstruct(ing) the universe to make it more joyful.”

Followers of Futurism rejected inertia and tradition. They welcomed the start of the First World War; confident it would purge Italian society of its debauchery and cast it, cleansed, into the fast-moving present. Futurists obtained inspiration from the developing industry, speed of the modern metropolis and technology. The first generation of Futurists generated works portrayed by “dynamic movement and fractured forms.” They sought to disaffiliate themselves from the prevailing concepts of space and time with the intention of putting the viewer at the epicenter of the work of art.

While the movement included many mediums, Italian Futurism was beyond an artistic expression but a new standard of living. An example can be seen in the opera movement, d’arted totale (total work of art). In this work, the audience is surrounded by a completely Futurist environ.

As it gained steam, Futurism gained new members and experienced a number of aesthetic developments from 1910’s “fractured spaces” to arte meccanica or machine aesthetics of the 20s. It then pressed on to easier, lyrical forms of the 1930s. As aviation’s status grew, it piloted to a swirling, often abstracted, aerial imagery of Futurism’s final stage – aeropittura – uniting Futurists in everything from patriotism and technology to speed and war with vertiginous painterly perspectives.

The “new believers” mesmerized by the allure of flight and aviation, spread their ideals to other art forms including dance, ceramics and photography. In the Guggenheim exhibition, three films by documentary filmmaker Jen Sachs, merges archival footage, photographs, ephemera, recordings and musical compositions to breathe life into the movements more “ephemeral work.”

The exhibit concludes with five monumental canvases that compose the Syntheses of Communications by Benedetta Cappa Marinetti.This is the first time that the mural has left Palermo, Sicily. The work celebrates multiple modes of communication and addresses the ideas of modernity and the “total work of art” that underpinned Futurism’s ethos.

One Response to "Italian Futurism at the Guggenheim"