‘Kate Plus 8’ Returns This Summer 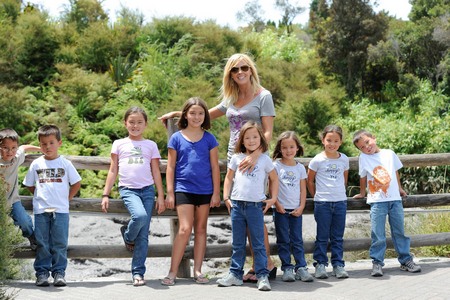 Kate Gosselin and her brood of eight kidlets will hit the air waves once again. As announced recently by The Learning Channel, (TLC), the family we watched grow up will soon grace the cameras for an update on their lives. Just a one hour special, scheduled for June of 2014, the Gosselin family will appear and bring the viewers up to date on what has been happening since their regular show ended a few years ago.

Not seen on TV for two years, the Gosselin clan continues to keep faithful fans and adorers interested. Sparking an interest in the family of twins and sextuplets, the Gosselin family rose to fame on their TLC show Jon & Kate Plus 8 back in 2007. Dealing with a set of twins soon after their marriage, Jon and Kate Gosselin embraced the possibility of more children through fertility treatments. Their wish was granted six times over with the early arrival of sextuplets. Their adventures in parenthood proved to be one of interest as the family eventually found themselves before cameras.

Documenting family chores, everyday living, field trips and vacations, the clan was on the road to success in the multi-media productions that chronicled their life. Becoming overnight stars in their own little world in Pennsylvania, the family quickly learned their privacy was an open book.

Gosselin, a registered nurse seemed to rule the roost with her own set of laws and expectations. Her loving husband, Jon, helped with diaper changes and miscellaneous chores. The cameras were rolling three to four days a week at the household and the money was rolling in. Sadly after many months and years of togetherness, the family split apart in 2009. Going through a public divorce, Jon and Kate seemed to work out their differences in a court of law and agreed to share parenting responsibilities.

After it was all said and done, TLC offered and ran more segments of the family, adjusting the title to Kate Plus 8. After enduring a tummy tuck that housed all the kids and giving up her spiky mullet for $7,000 hair extensions, Gosselin reinvented herself and the family dream. Her books continue to be bestsellers as Eight Little Faces, Multiple Blessings, I Just Want You To Know: Letter to My Kids and most recently Love is in The Mix have hit the charts of book readers around the globe.

The excitement, chaos and open truth of the family dynamics came into play as the Gosselin family tried to stay normal and do everyday things. Always being second guessed by critics, the twins and the sextuplets just thought it all to be a regular routine of growing up. It was a fact growing up as a Gosselin, as twins Mady and Cara have gone on to become typical teenagers at age 13, embarking on their own take on life.

The sextuplets, Aaden, Hannah, Joel, Collin, Leah and Alexis are now nine years old and getting wiser by the day. The group has experienced meltdowns both on and off the camera as real life always intervenes. Mom Kate has always been quick to intercept and smooth out the rough edges of emotional turmoil.

Gosselin, has kept on going with her books and interviews and enjoyed some publicity with an appearance on Dancing With The Stars in 2010. She wasted no time and was up and running again with TLC’s Kate Plus 8 soon after the divorce. Jon went on to many girlfriends since leaving Kate and is finding himself on reality television again. Once stating that his kids were victims of reality TV, he has embraced the fare once more with appearing in UH1’s Couples Therapy with now girlfriend, Liz Janetta.

As Jon is not scheduled to appear on the summer special, Kate, worth close to $200 thousand, is keeping her options open. The kids are excited, as they grew up with the cameras and the hoopla. It will be like old times to recount and reconnect again with their fans and loyal viewers as Kate Plus 8 returns once again this summer.

One Response to "‘Kate Plus 8’ Returns This Summer"