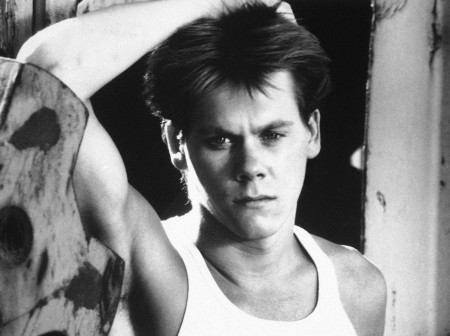 Looking at the prolific career of Kevin Bacon, one thing is apparent just by the sheer number of projects he’s worked on, never mind Six Degrees of Kevin Bacon, how about six degrees of awesome. Look up this powerhouse on IMDb and there are 78 credits attached to his name. Of course one is in post production and the other, another horror film, is in pre production but that still leaves 76 completed credits.

The 55 year-old star of FOX’s The Following got his start on daytime television back in the days when they were still called soaps. Before working on his first soap opera, Search for Tomorrow, Bacon worked on National Lampoon’s Animal House in 1978. Later he played one of the doomed camp counsellors in Friday the 13th and wound up back on television in another soap opera, Guiding Light.

It was not until his work in the 1982 Barry Levinson film Diner that Bacon was really noticed and his next big film would be the 1984 teen movie Footloose. The star has steadily worked and appeared in several horror films along the way, one being the Hollow Man which was a reworking of the Invisible Man.

In the United Kingdom, he appeared in a series of television commercials for EE mobile phone network and the company’s new Orange Wednesday’s “two for one” movie deal. The ads came about after Six Degrees of Kevin Bacon became a popular cultural game. It was discovered that since Bacon had worked on so many projects in the entertainment business that any number of Hollywood actors could be linked to the star in a “handful” of steps.

Kevin Bacon has been showing that he is six degrees of awesome in his current project, The Following on the FOX network. As the obsessed former FBI agent Ryan Hardy, Bacon leads a small team in the constant pursuit of serial killer Joe Carroll. Along the way, Hardy, his niece Max and FBI agent Mike Weston come in contact with a number of homicidal crazies who all support Carroll in his madness.

The star showed that he has not lost his sense of humor or his dancing ability when he recreated his dance moves on The Tonight Show performing his dance number from Footloose on the tenth anniversary of the 1984 film. Host Jimmy Fallon set up the homage by telling the studio audience that NBC had banned dancing on the set.

As Fallon waits for Bacon to come through the curtain, the camera goes back to Kevin’s dressing room where he reacts to the news that there is no dancing on The Tonight Show. He then goes through the choreography that helped make him a star.

The homage to the film showed that Bacon has not forgotten how he got to where he is today. While fans of Kevin can see him twice weekly on FOX in one of the best suspense thrillers on television, The Following airs on Tuesdays and is run again on Saturdays, he finished work on Skum Rocks! The film, which has been called a “real life” This is Spinal Tap was filmed last year and is still in post production.

Kevin Bacon is also returning to the horror genre in 6 Miranda Drive which is in pre production at this time. Forget Six Degrees of Kevin Bacon and think six degrees of awesome, especially if you’ve been watching his performance in The Following. For those who missed his dance number on The Tonight Show, here is the video of his entrance. Enjoy.