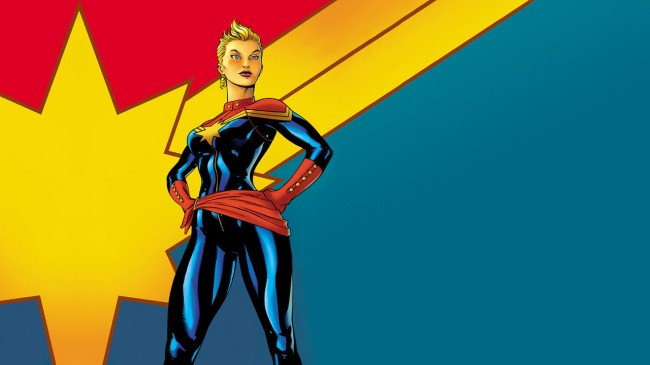 President of Marvel Studios has hinted at the idea of a feature-length Captain Marvel film. In an interview with Badass Digest Marvel Studios, President Kevin Feige teases that the studio is eager to get going with a solo female superhero film based around Carol Danvers, more famously known as Captain Marvel or Ms. Marvel. While there have been several rumors and reports indicating that Feige and company are planning on creating a solo Black Widow film starring Scarlet Johansson following the release of the highly-anticipated sequel The Avengers: Age Of Ultron, Feige suggests that Marvel Studios may take a different route.

Marvel Studios President Kevin Feige suggested that while they may receive credit for releasing the first female superhero film of the modern era with a Black Widow solo feature, the character will have already played a large part in three or four movies by the time the film would be finished. Therefore, the studio wants to take a new character that film audiences have yet to see and introduce her to the cinematic universe with an origin story. Feige concluded the interview by stating the female superhero they have discussed the most is Carol Danvers, Ms./Captain Marvel.

Rumors state that Kevin Feige would likely tease the appearance of Ms./Captain Marvel in a ‘Phase Two’ film prior to her getting her own solo effort during the studio’s planned ‘Phase Three’. At the moment, Marvel Studios has only officially announced two films as apart of their ‘Phase Three’. The first one being Edgar Wright’s long-in-development Ant-Man film which is scheduled for release on July 17, 2015 and the third entry in the Captain America franchise which was recently announced to open on May 6, 2016 against comic book competitor DC’s Batman vs Superman film. A rumored third entry into the Thor franchise as well as a Doctor Strange adaptation are also said to be a part of Marvel Studios ‘Phase Three’.

With the tease of the possible Captain Marvel film, Kevin Feige continues to forge new territory in the world of comic book adaptations. Eager fans can expect the president of Marvel Studios to make any big announcements on the company’s ever-expanding roster of films to once again take place at this year’s San Diego Comic Convention running from July 24 till the 27.