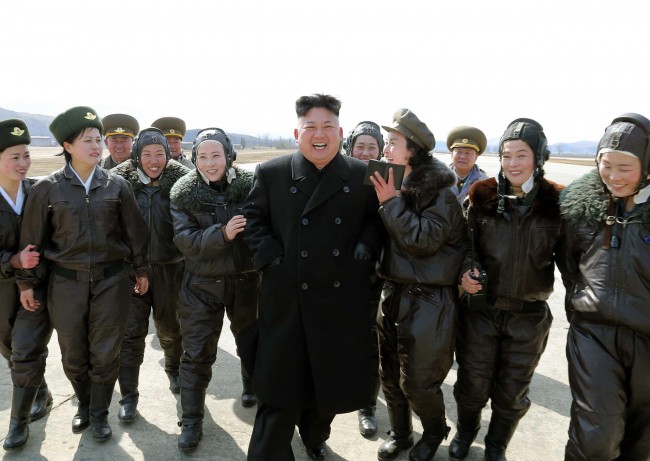 North Korea’s young leader Kim Jong Un seems to be acting like a regular playboy these days, according to recent press coverage. The very young dictator, who is 31-years-old, was seen cavorting around with a group of blushing female pilots during a series of drills at a North Korean air strip – practically reenacting a scene from the popular TV series The Girls Next Door, which featured “Hef” and his Playboy Bunny girlfriends. Although Jong Un almost channels an odd version of Hugh Hefner during the event, outside of that fun-loving image stands a man who plans on executing a group of 33 Christians, suspected of “no good”.

On Friday, North Korea’s Workers party released a few choice pictures to Korean Central News Agency. These very cheerful photos show Jong Un smiling, laughing, and happily posing alongside a gang of seemingly smitten female pilots at an air force based. The imagery harkens back to a time of Hugh Hefner, sitting in his mansion, surrounded by admiring women, looking on in awe of his success and manhood. The 1940’s style uniforms worn by the North Korean ladies certainly helped to round out the strangeness of the scene.

Supposedly, Jong Un also oversaw a series of flight drills performed by the giddy group, which went off without incident. The location or exact date of this aerial event is not clear. Yet, there seems to be a message here: a young virile leader in charge, and without fear or care in the world. This event comes just after the North Korean dictator’s interesting show of military strength at another recent event.

In a trip to North Korea’s coast, Kim Jong Un sternly looked on as an evaluator during an elaborate shooting contest (scroll down for video). In possibly one of the most expensive displays of machismo, an authoritatively dressed Jong Un utilized a pair of binoculars as he watched a group of loyal soldiers literally fire missiles over the freezing cold waters off it’s eastern border. Afterwards, awards were given out and more snapshots of a smiling dictator were taken. The message here seems to be, that along with Kim Jong Un’s Hefner-like prowess, he emanates strength and military mastery. Now, Kim Jong Un is no Hugh Hefner to say the least, but he somewhat vaguely channels the jet setting lover boy these days, all the while planning a very non “Hef”-like act of executing Christians assumed to be planning overthrow of the current regime.

At the same time these displays of confidence and virility seem to abound quite frequently in Jong Un’s world, there are actually much more serious matters pressing on the country. To choose just one, there is the matter of anticipated executions regarding a group of 33 Christians, believed to be planning a government coup.  South Korean missionary Kim Jung Wook who is suspected of having started around 500 underground houses of worship was arrested last year, and now any of those working alongside him will be killed as accomplices.

There are very two distinct visions of North Korea’s dictator these days, at least as far as the publicity goes. There is the dictator, a tyrant who will destroy anything that seems to encroach on his path of absolute rule (including family members). Then there is another image being created. Whilst planning mass executions of Christian “rebels”, the world catches imagery of Kim Jong Un, a young playboy who channels the likes of Hugh Hefner.

Sources:
Daily Mail
The Guardian
The Independent
The Washington Times