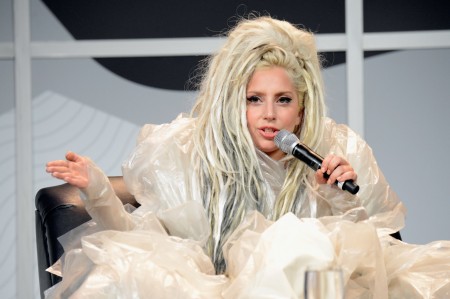 Lady Gaga has been making news of the grotesque sort over the week with her inclusion of performance art that makes you go f***, or rush off for a sick bag. On top of this revolting live display of the projectile vomiting version of Jason Pollock, Mommy Monster, is turning the air blue at the thought she’s being compared to Katy Perry.

Before heading off to the nauseating performance on stage at the South by Southwest Music Festival show, it would not hurt to agree with the 27 year-old performer. Some misguided individual made a comparison between Gaga and Perry but only in the two ladies’ record sales.

There were other comparisons, but these were really on the periphery of the discussion. Writers risked the wrath of Gaga when they compared the sales figures of Mother Monster’s album ARTPOP, which will have an ARTPOP 2, and 29 year-old Perry’s Prism.

As annoyed as Lady Gaga might be, the simple truth of the matter is that in term of cash register receipts, Perry trounced the controversial performer. It is obviously a sore point with the singer, as she pointed out that she too has had sales that hit the million mark in the first week as well. It should also be pointed out that in terms of style the two performers are world’s apart.

Before cursing like an annoyed sailor about the Perry issue, Lady Gaga decided to partake in some live performance art at the 2014 SXSW festival. This display required those in the audience to have strong gag reflexes as the performance artist who interacted with Gaga vomited over her during a number. While the singer may have shouted “F***,” at the Perry comparison, the crowd watching the regurgitation of paint may have been shouting the same expletive.

Millie Brown, the “artist” in question, drinks colored milk and then, fingers stuck firmly down her throat, pukes the stuff back up over blank canvas. She has been doing these Pollock type paintings since 2005. Brown has also been “recognised” by Ripley’s Believe it or Not, whatever that means.

Lady Gaga had the performance artist drink a load of green milk after which Brown threw it all back up over the singer mid-performance. At least one fellow celeb isn’t a fan of vomiting back up colored fluid in the name of art. Demi Lovato slammed Gaga for allowing Brown to do her vomitous art all over her onstage. Demi claimed that the singer was promoting Bulimia and not just engaging in an act that screams of bad taste.

Sadly, any article on SXWS should take a moment to mention the horrible crash which claimed the lives of two people and injured a further 23. All of Austin, Texas where the South by Southwest festival takes place is reeling from the accident and one Rashad Charjuan Owens has been charged with one count of capital murder. While the community are attempting to deal with the horror and shock of the deadly crash and its consequences, the festival itself is attempting to continue.

SXSW will end on Sunday and at least the crowds will not be forced to endure another Lady Gaga live performance art display that makes you go f*** in horror or disgust. Mother Monster should not be too upset at comparisons to Katy Perry, the Roar singer would never let anyone vomit over her on stage.