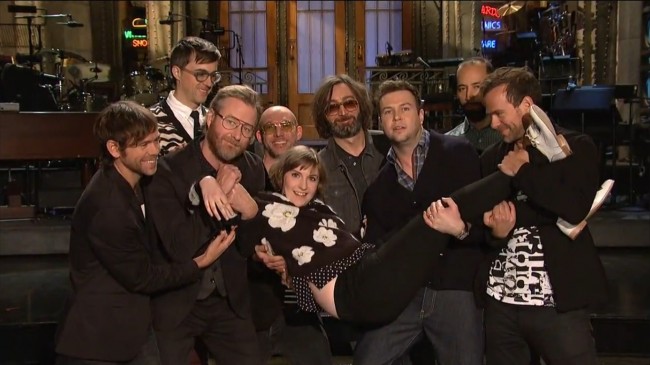 Lena Dunham hosted Saturday Night Live last night in New York City and didn’t disappoint as she brought the topics of sex and nudity to the forefront of the show. Dunham is the writer, director, and star of the edgy HBO television show Girls, which is currently in its third season and has already been renewed for a fourth that will air in 2015.

Much of the discussion of Girls centers on its realism, most specifically the nature of sex in relationships and on its own. The show contains plenty of nudity in the form of women with real, average bodies, rather than well-toned actresses and models. Episodes are inspired from instances in the 27-year-old’s life and feature Dunham as Hannah Horvath, the lead character whose adventures, and misadventures, are shared by her friends as they all try to navigate life in Brooklyn, New York. Girls is produced by Judd Apatow and has received critical acclaim for its storytelling.

The show has also been critically panned for being too realistic, as some scenes are as difficult as they are enjoyable to watch. Dunham has become a pop-cultural icon of feminism, nudity and sex, and it was expected that her first hosting gig on SNL would focus on her entertainment reputation. She did not disappoint.

In her opening monologue, Dunham got right to it, mentioning the old familiar tactic of imagining the audience naked if one is nervous while giving a speech. She then lamented about how perfect strangers bring to her their graphic stories and questions, and happily described Saturday Night Live as a place where everyone is instead respectful of other people’s “boundaries,” which spurred a parade of cast members to come on stage and share their own sexual stories and to get nude and demonstrate to the host some of their anatomical abnormalities.

A sketch later in the show featured Dunham in a movie trailer as a nude Eve in the Garden of Eden, along with Taran Killam, who played Adam as a parody of Adam Driver, the actor who plays her boyfriend on Girls. Dunham and Killam frolicked in a forest with blurred censors covering certain body parts, and then Eve sought out advice from a snake who was emulating the Girls’ character Shoshanna, side bun and all, played by Vanessa Bayer.

Dunham did well, especially considering she had to play against megastars Liam Neeson, Fred Armisen, and Jon Hamm, who all popped into the show for cameos. In perhaps her best performance of the night, Dunham channeled a sad Liza Minnelli who was still pouting after failing to get into Ellen’s star-loaded selfie last weekend at the Oscars.

Brooklyn was well represented as indie rock band, The National, who are based in the borough, were the musical guests. They played two songs, Graceless and I Need My Girl, and both performances were excellent.

It’s now beyond the point in Dunham’s career where observers can say she has potential. Hosting a live show takes special focus and ability and Girls star demonstrated a new range that people weren’t aware she possessed. Dunham also stuck to what has helped make her famous though, bringing to Saturday Night Live some HBO-caliber grit and nudity that was well worth staying up for.