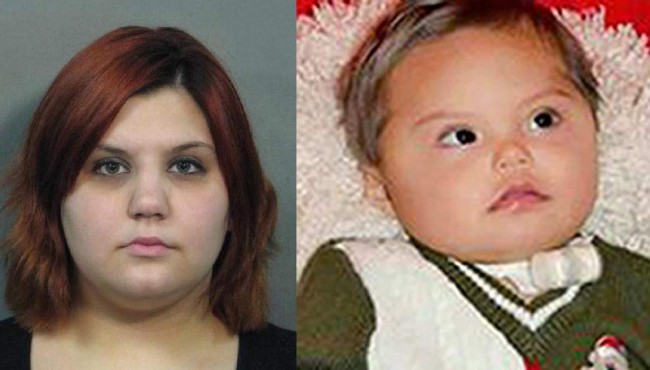 When police arrived at a home in Belle Chase back on January 24, they found a 17-month-old baby not breathing and without a pulse. The child was rushed to a New Orleans hospital where he was pronounced dead on arrival. Louisiana police arrested Erika Wigstrom, the mother of baby Lucas, after the woman confessed to poisoning the child with hand sanitizer in order to end the baby’s suffering; what the young mother calls a “mercy killing.”

The Plaquemines Parish Sheriff’s Office (PPSO) released the autopsy report which showed that the toddler died from “acute ethanol intoxication.” In Louisiana the legal limit is .08 and the child, Lucas Ruiz, had a blood alcohol content of .280. Commander Eric Becnel of the PPSO said, “That would mean almost four and a half times the legal limit.”

Cesar Ruiz, the child’s father,  is awaiting trial on a charge of second-degree cruelty to a juvenile for pouring rum into the baby’s feeding tube in October 2012. Baby Lucas was born with Downs Syndrome and a heart defect and was scheduled for a heart operation that October. According to Wigstrom, Ruiz hoped that the toddler “would die during his upcoming heart surgery.” Wigstrom said that Ruiz believed the child would be better off dead. Jefferson investigators said that Ruiz took an empty sugar container from the hospital, went home and filled the container with rum and returned to hospital where, once Wigstrom was out of the room, the father poured the rum directly into Lucas’s feeding tube. Afterwards Lucas began to have seizures and it was then when the discovery of alcohol was found in Lucas’s blood.

Wigstrom has come out and declared that it was not Ruiz who poisoned baby Lucas the first time, that it was she who tried to poison the baby back in October and that it was not rum that was used; it was perfume.  Back in the spring of 2013, Wigstrom went on a local news channel blaming Ruiz for harming the child and said how painful it was for the young mother to hold baby Lucas while having seizures. In Wigstrom’s confession on Tuesday, investigators say that the woman took responsibility for the crime and did so with no remorse whatsoever. Wigstrom said at the funeral service, “I have no more tears to shed because my kid is so cool, God wanted him. I mean, if anybody is lucky, it’s me for being his mom. I am not going to cry.” The obituary for Lucas said that the baby had died “while being cradled in the arms of his beloved mother.” Wigstrom stands by the fact that Lucas was suffering and the mother did what the woman felt was best for the child. Calling Wigstrom’s actions a “mercy killing.” The sad thing about this case is that baby Lucas suffered tremendously after first being poisoned with rum/perfume and then again after the Louisiana mother injected hand sanitizer into the baby’s feeding tube.

“It’s a tragic situation.” Commander Becnel said. “I don’t know what goes through someone’s head,” the investigator continued, “to harm a 17-month-old.  I have a 19-month-old myself, and I couldn’t put it in my system to do something like that.” There is no word yet on what will happen to Ruiz after the confession Wigstrom gave. The woman faces life in prison and no bond has been set for the young mother. The Louisiana baby suffered by the hand of Lucas’s mother after Wigstrom poisoned the child with hand sanitizer. Baby Lucas did not die immediately but agonized for  a whole day before succumbing to the poison.

One Response to "Louisiana Mother Poisons Baby With Hand Sanitizer"