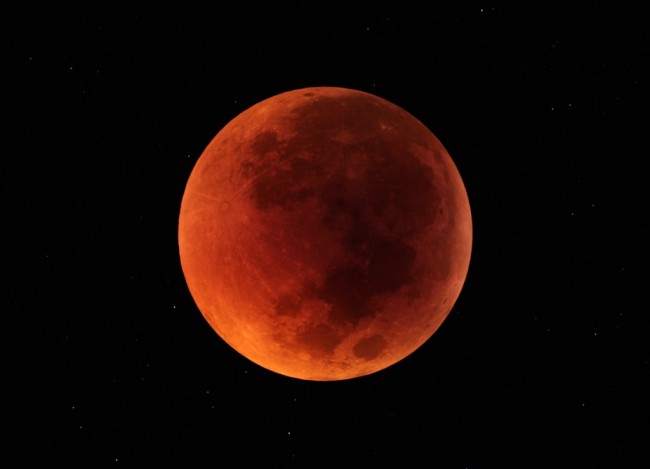 America is soon to be treated with the first of four marvelous sky spectacles. The lunar eclipse has been celebrated as a sacred event by many religions throughout history, but the coming tetrad of eclipses seems to have been foretold in the prophecy of the Four Blood Moons. The date of the first total lunar eclipse will occur early April 14 on the West coast, and April 15 elsewhere in the States, and will be visible all across America.

The total lunar eclipse is the most impressive and dramatic of all lunar eclipse events. The moon proceeds through the previous phases of eclipse, entering the shadow of the Earth and gradually becoming darkened as the suns rays are blocked from its surface.

When the moon reaches its peak of eclipse, the resulting display is nothing short of a miracle for the spectator, as the moon demonstrates its power by reflecting a fiery red glow towards Earth. All of the sunsets and sunrises in the world will be experienced at once, refracted onto the surface of the moon. This amazing finale will last around one hour and 18 minutes.

It is not difficult to see why religions choose to perform special ceremonies and prayers in reverence of a lunar eclipse. With such a fierce red glow, the moon seems to take on an even more powerful appearance, and encapsulates a feeling that earns it the right, as it has been known in mythology, to be called “ruler of the stars.”

One particular religious prophecy strikes a chord in concern to the upcoming lunar events. The tetrad of lunar eclipse to come over the next couple of years could resemble the “Four Blood Moons,” a prophecy spoke of in the Book of Genesis, and the Book of Joel in the Hebrew Bible. The lunar tetrad may have a special significance for members of the Christian and Jewish faith. 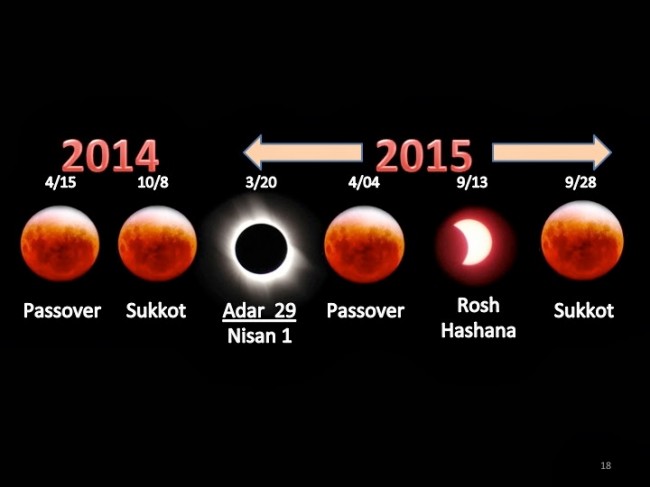 Genesis 1:14, which has been quoted in support of the prophecy, and says this: “And God said, Let there be light in the heaven to divide the day from the night; and let them be for signs, and for seasons, and for days, and years.”

The Book of Joel, Chapter 3:3-4 provides further references to blood moons: “The sun shall be turned to darkness, and the moon to blood, before the great and terrible day of the Lord come.”

Believers of the prophecy, such as Mark Blitz, founder of a major Hebrew resource centre, understand that single “blood moons” come about relatively often, but that the appearance of four is significantly more rare. As if to further affirm the religious prophecy two of the lunar eclipses fall on significant Hebrew holidays; Passover on April 2014, and Sukkot in August 2014, both of which are Jewish feast days that celebrate Jesus.

Blitz argues that the relevance of the dates in the appearance of the four blood moons holds great significance, and points to the fulfillment of a prophecy which, in short, suggests the Second Coming of Christ.

In a recent book titled Four Blood Moons: Something Is About to Change,” written by Pastor John Hagee, ideas are outlined that relate the upcoming blood moons to the returning of Jerusalem to Israel, driven by the return of the Messiah. This view does not represent the entire spectrum of ideas concerning the Four Blood Moons, but many are convinced there are signs of Christ’s Second Coming.

The worship of the moon is prevalent in many religions, where it’s cyclical nature is often associated with the rhythms of life. This symbolic understanding was recorded in ancient Egyptian civilizations among others, and its monthly cycles are used by Pagans to enhance magic. In Islam the moon is considered to be one of the two signs of Allah, along with the sun. An eclipse of either, is taken as a reminder of the “Day of Judgement,” and is hence dedicated to prayer, and remembering Allah.

Science has also had a keen interest in the study of the lunar eclipse. A lunar eclipse from the scientific perspective is the result of the moon passing through the umbral shadow of the earth. The Earth blocks the path of the sun’s light from reaching it, casting a dark shadow over it that that is often visible. The reddish glow of the lunar eclipse occurs during totality and can be explained by Earth’s atmosphere which refracts the light of sunrises and sunsets, and filters out shorter waves of light, such as blues and greens.

The scientific view however, according to advocates of the prophecy, is not inconsistent with the religions view. Advocates tend to agree with the scientific understanding of why the moon turns a fiery red during the lunar eclipse. For a religious person who understands the world through signs from God, the lunar eclipse tetrad speaks a second language; one that science does not understand.

With or without the Second Coming April 14 marks the beginning of the series of lunar eclipses; a tetrad that will unfold over the next two years. Americans will have the opportunity to see further lunar eclipses on October 8, 2014, April 4, 2015, and again on September 28, 2015.

The table below gives times when lunar eclipse will occur, so that it can be enjoyed by everyone across America, whether religious or not. For those who believe the prophecy of the Second Coming of Christ, the lunar eclipse tetrad could represent the Four Blood Moons. For most religious and spiritually inclined people it will be a time for worship, and prayer. For everyone it will be a beautiful sight to behold. 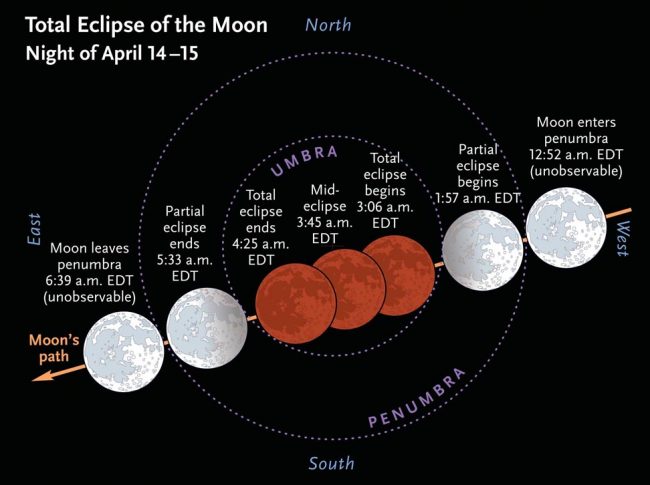