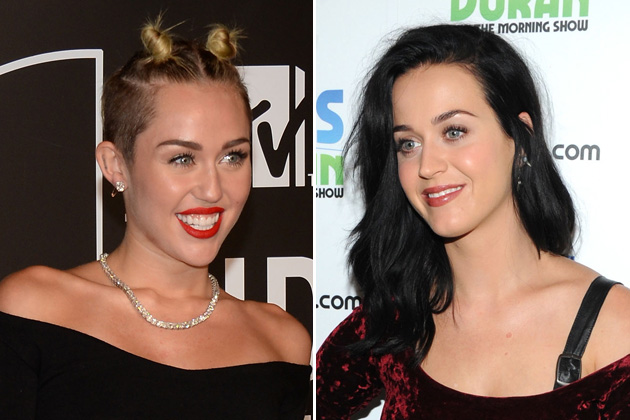 Many may remember the infamous kiss, years, back between Madonna and Britney and Christina. It seems girl on girl “action” continues to get a lot of publicity these days. The latest, very popularized female interaction was between Miley Cyrus and Katy Perry. The difference, this time, is that the tongue-tying incident was not planned. At a recent Miley concert in LA, the young singer and daughter of semi-famous father Billy Ray (who’s having his own comeback of sorts) leaned over into the front row, where Katy Perry had stepped for a harmless peck. That’s when the Bangerz rocker chick planted a surprise French kiss on the raven haired Teenage Dream beauty without warning. It seems, as a reaction to the kiss, Perry has since made reference to Miley’s signature free-roaming, possibly unsavory tongue – and Cyrus is now crying over it.

Soon after the kissing incident occurred, Katy Perry happened to be on an Australian TV and radio. This is where she referenced the Miley tongue, saying only God knows: “…where that tongue has been… [it’s] so infamous!”  Apparently, Perry had only intended to give the Wrecking Ball-er a harmless kiss, which would have been “fine”.  However, it’s no secret that Miley Cyrus has now become famous for her interesting use of tongue, along with her acting, dancing, and singing. She is constantly seen with it hanging out in pictures, posters, in videos and on stage. Perhaps the Katy Perry reaction to the kiss was not so far off.

Well, in today’s media heavy world, anything can be misconstrued, taken out of context or even pre-fabricated. Assuming that this whole episode is not actually a ploy for more attention of both Perry and Cyrus, then what’s to make of Miley’s rebuttal? It seems, on the heels of the Perry reaction to said kiss, Miley Cyrus took to the social media monolith Twitter and fired back, crying that Perry, herself, should be more concerned with her ex-boyfriend John Mayer’s tongue: “…good thing [your ex-boyfriend] is ur EX BOO cause we ALL know where THAT [tongue has] been”

In the all-time rankings of best girl-on-girl kisses, there are so many other moments that entertainment fans might consider to be much more impressive. Aside from Madonna and co., there was Sandra Bullock and Scarlett Johansson, Britney and Rihanna, and Sandra Bullock again… with Merry Streep? Seems that, for the most part all these memorable moments were considered to run the range from fun loving to scandalous, but never really did they turn into some major feud – at least, not on this level.

One might be able to understand Katy’s shock at the moment of “impact” recently. Apparently, without warning, Miley: “…tried to move her head and go deeper and I pulled away.”  Now, Perry’s reaction, regarding the Miley tongue as a gigolo unto itself seems to make sense in the context that it’s been used recently (her tongue that is). Perhaps, the younger Miley Cyrus has a ways to go in terms of having a sense of humor about her own behavior, i.e. her kiss and not spend time crying over a seemingly valid reaction made by a very established and slightly more mature celebrity like Perry.