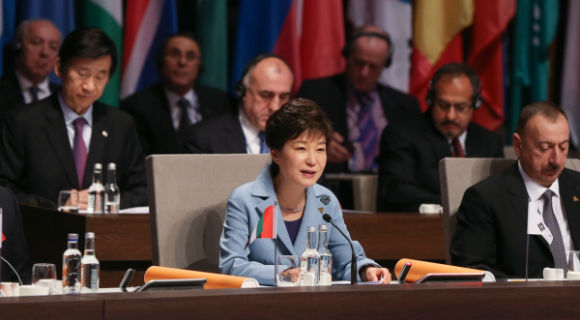 South Korea President Park Geun-hye has been on a mission to reunify with North Korea. On March 24 the South Korean leader met at The Hague with U.S. President Barack Obama and Japanese Prime Minister Shinzo Abe. In the meeting, the leaders of the three countries pledged to cooperate vis à vis N Korea’s nuclear and missile programs. In The Hague, Ms. Park gave a speech, warning that the North’s nuclear devices could land in the hands of radical extremists. In response to her remarks, the North’s leader, Kim Jong-un, verbally assaulted her, likening her to a “peasant woman” who was “blabbering.” He also said she was a pawn in the hands of the U.S. and that she must learn to cease such reckless babble.

On March 22, prior to the landmark Japan-South Korea summit in The Hague, North Korea test-fired 30 short-range missiles into the sea. This action was in direct opposition to demands from Seoul and Washington, D.C. to stop these tests, which they called “provocative.”

On March 26, during the summit meeting, N Korea sent two additional medium-range ballistic test missiles into the sea, ostensibly in response to the meeting. This is in direct violation of United Nations resolutions, prohibiting Pyongyang from conducting such tests. In response, the UN Security Council set up urgent closed-door sessions to discuss potential condemnation of these launches.

Ms. Park became president of South Korea on Feb. 25, 2013–-just two weeks after N Korea had launched a third nuclear test–the first two occurring in 2006 and 2009. This quashed efforts towards engagement with the North–-something that was part of her presidential campaign. Prior to election, she had promised to set as priority “national reconciliation” as well as social welfare and “economic democracy.”

President Park is the daughter of former President Park Chung-hee, and she served as South Korea’s first lady after her mother was murdered in 1974 by a North Korean gunman trying to assassinate her father. In 1961 Park Geun-hye’s father became president of South Korea after seizing power in a military coup. He was assassinated in 1979 by his spy chief. Ms. Park is the first female leader of South Korea, which has the most gender inequality among developed nations.

In her speech in The Hague, Ms. Park said that North Korea’s nuclear program must end. She said that to avoid doing so could lead to an accident more dangerous than Chernobyl. North Korea’s official Committee for the Peaceful Reunification of the Fatherland protested Ms. Park’s remarks, saying that they “violently trampled” on an agreement made last month when the two countries had met and agreed to end slander across the North-South border.

The recent verbal assault from North Korean leader Kim Jong-un in response to Ms. Park’s speech about nuclear dangers was not the first time he had insulted her. In the past, he had made negative remarks about her gender, referring to “the venomous swish of her skirt.” Response by South Korea was that the North’s comments were lacking basic etiquette and were deeply regrettable.

President Park Geun-hye has made reunification one of her key platforms. In 2013, she offered a trust-building process to the North. She cautioned, however, that she would not accept any threats to national security. By October, the president issued words of caution, saying that the situation between the North and South was “grave.” She said that “watertight security” would be essential to ensure that the North would take the path of genuine changes and safeguard peace. Tensions continued to mount with accusations on both sides.

On March 27 a North Korea fishing boat strayed over the maritime border into South Korea waters, sailing for nearly two kilometers, ignoring warnings to return home, before the boat was seized. The crew members were taken into custody for investigation to determine if the three men were trying to defect.

While in Europe, President Park visited the remains of the Berlin Wall, looking at the hope stemming from East and West Germany’s reunification. While there, she expressed that she looks forward to the time when the demilitarized border between North and South Korea will, too, become a symbol of peace.

In response to the North’s latest nuclear assaults, however, what will be the outcome of the recent UN Security Council talks remains to be seen. It is unclear whether or how N Korea will be punished for its continued violation of UN resolutions. At this point, reunification of the North and the South looks far away, but as the South’s leader, President Park, remarked recently, she has hope for a peaceful reunification.