NASA News Highlights of the Week: Fish Under the Ice on Europa? (Video) 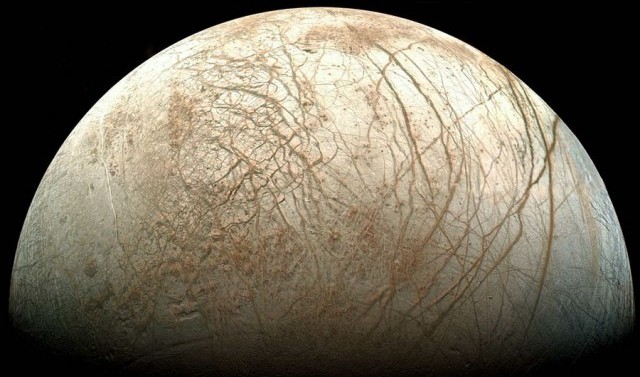 The News Highlights of the Week in the world of science, the possible future ventures of NASA have given a rise to a question of whether there is “fish” under the ice on Europa, one of Jupiter’s moons. Among the many proposed missions that have been in news this week, aside from Europa, are a two person flyby trip to Venus and Mars and a mission to visit an asteroid.

The Europa mission might perhaps be the most compelling one that to most space enthusiasts as astronomers have contemplated the odds of Europa being a home to some lifeforms and many suggested it to be highly probable. Scientists have had their eyes on a mission to the icy moon for a long time, but the high costs have perhaps proven to be the biggest obstacles till a recent discovery gave life to a new possible way to reach its wet surface and reveal whether there is “fish” under the ice.

NASA appears to already be building a savings account with Europa’s name labeled on it as it has set aside some $15 million in its proposed budget for the coming year, 2015. The funding is reported to go to some sort of research mission to the icy moon which, according to Elizabeth Robinson, the agency’s chief financial officer, is slated to be launched sometime in the mid 2020s. No further details have been made official in regard to the nature of the project.

Further, according to Robinson, such challenges as the high radiation environment around the planet of Jupiter as well as the distance from Earth would need to be overcome. She refers to the 1989 Galileo mission to Jupiter, a journey in which it took six years for the NASA spacecraft to reach the planet Jupiter.

Astronomer Laurie Leshin of Rensselaer Polytechnic Institute described the potential Europa project as a risky mission to an astonishingly fascinating object in our own solar system.

Much like Galileo, other NASA probes have ventured past Europa, but none has been intentionally concentrated on the icy moon, which is one of dozens orbiting the gas giant of Jupiter, and in spite of attempted lobbying by astronomers, the estimated billions of dollars involved have held the potential proposals back.

A scientific discovery was made last year, revealing plumes of water bursting up through the ice on Europa’s surface. Flying down through those water geysers could potentially reduce the cost of exploration significantly and possibly make it more efficient than a simple circumnavigation or even landing on top of the ice itself, according to Robert Pappalardo, a Europa scientist at NASA.

There are several competing ideas on the table for a potential Europa mission pending evaluation by the agency, so the size or cost of the project has not been determined yet, according to Robinson. A major mission goal for NASA, as she further states, would be scouting the liquid water discovered under the ice for potential life, or fish, as some have further labeled it, possibly as a humorous highlight during their working week.

Among other potential missions and projects that have been brought into light this week in relation to the coming 20 years of NASA space aviation endeavor are the confirmed plans in a budget proposal for the development of a human mission to a nearby asteroid as well as a proposal from multimillionaire Dennis Tito, who’s previously visited the International Space Station, to arrange a flyby mission to Mars and Venus.

Avi Loeb, a Harvard astronomer reportedly said that going to Europa would be more astonishing than an exploration of the dry planet of Mars, as he notably suggested there might even be fish under the ice, a statement which to some might further color up the NASA highlights of the week.