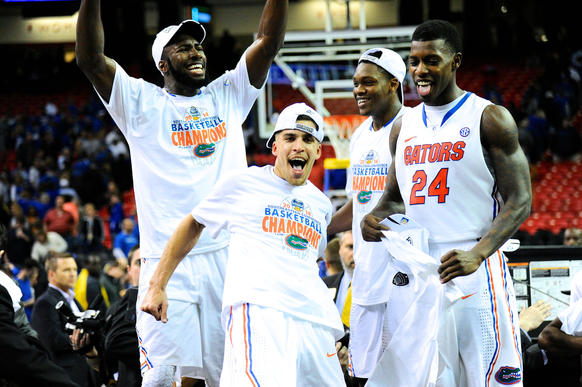 If there was one thing to be learned from the 2013-14 NCAA basketball regular season, it was that parity across the nation is at an all-time high. There are no sure things such as the 2012 Kentucky Wildcats led by Anthony Davis. Even the top overall seed, the Florida Gators, owners of a 26-game winning streak, have left much to be desired. Warren Buffett sure picked a good year to award a billion dollars to anybody capable of filling out a perfect bracket, because this bracket is likely setting the nation up for a year of dramatic upsets. Hint: Do not go chalk when filling out the bracket in an office pool.

All four one and two seeds have legitimate flaws. In the South region, Florida is likely the safest bet of the entire bracket, but played in a weak SEC and played a lot more close games to subpar teams than desired of a national champion. The two-seed Kansas Jayhawks are without star freshman center Joel Embiid, while three-seed Syracuse has lost five of its last seven games. Undefeated one-seed Wichita State has yet to play a ranked opponent, and has the luxury of having the defending national champion Louisville Cardinals in their region, as well as Duke and Michigan. Top-seed Arizona has been shaky since the injury to Brandon Ashley as well. There are no teams to have unwavering faith in in this year’s bracket, which is a testament to how even the playing field is now.

The selection committee itself even admitted what a difficult year this was. Almost every team could have been seeded one to two slots higher or lower without so much as a bat of the eye.

“The parity in college basketball was more challenging than any year that I have been on the committee,” said Selection Committee chairman Ron Wellman. “Which is going to lead to a fantastic tournament.”

All but one of the teams seeded eight or nine have been ranked for a good portion of this season, news that does not bode well for the top seeds. Late-season performance is another indicator of tournament success, which spells bad news for all the two seeds. Villanova enters the tourney following an embarrassing loss to Seton Hall in the Big East tournament, Michigan is coming off a loss in the Big Ten title game, Wisconsin has lost two of its past three and Kansas limps in, having lost three of five and missing its superstar Embiid.

When picking upsets, one has to understand that with the amount of parity in college basketball, upsets are not all that surprising. At least three double-digit seeded teams have advanced to the sweet 16 in each of the past four seasons, so it is a good bet to roll with a few of those underdogs past one first round upset. Going chalk in later rounds or putting faith in experienced teams is a safe and smart bet, but there will always be a whirlwind of madness in the first few rounds that have to be sniffed out.

The 2014 NCAA Tournament is sure to have a hefty amount of upsets, so bracket makers need beware. March Madness gets the juices flowing in every sports fan, and everyone wants to be the one to brag around the water cooler. The only way to make that happen in a sport full of such balance is to prepare for a bracket with a lot of lower seeds advancing a couple of rounds, but that is what makes March so maddening and lovable.