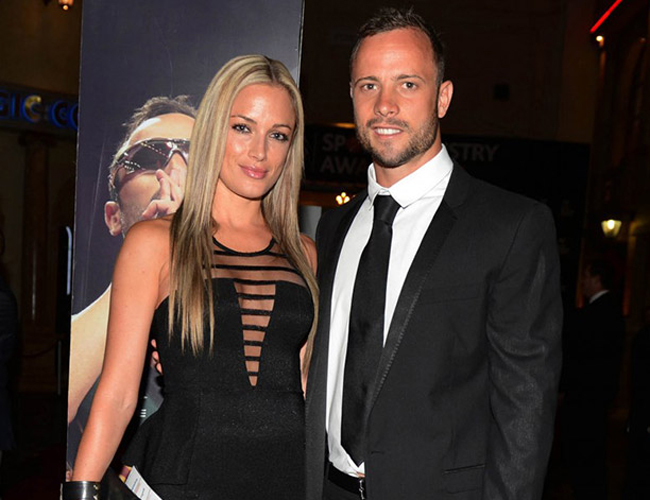 Samantha Taylor, an ex-girlfriend of Olympian double amputee, Oscar Pistorius, broke down in tears several times today as she told the court how the athlete had cheated on her with the girl he killed, Reeva Steenkamp, and a woman called Anastasia. Judge Thokozile Masipa adjourned the court twice to allow the beautiful 21-year-old blonde witness to regain her composure after she had also said to the court that he kept his gun with him at all times.

The world-famous athlete  has been charged with murder as well as two additional charges that relate to firing guns in public places, and another that relates to having illegal ammunition. It is “common cause” that he killed Reeva Steenkamp; the issue is whether he intended to do so, or whether he really believed that the person he fired at was a burglar. It is also agreed that Pistorius fired four shots through a locked toilet door, and that it was these shots that killed his girlfriend, though it is not agreed which shot or shots were fatal.

Taylor was giving evidence on the fifth day of the sensational trial that is playing out like a television reality show in the Pretoria High Court in South Africa. About 500 journalists are covering the case on the ground, in real life, with many more following up on stories that have been posted in newspapers and online. Millions of people worldwide are also following the case that is the first in South Africa that may be broadcast live, though there are restrictions. For instance, Taylor opted not to be filmed, which means that everyone could hear her voice, but images of her – both live and historic – may not be published or used on digital papers covering the court case.

The main focus of Taylor’s evidence related to a well publicized incident in September 2010 when the blade runner is alleged to have fired his gun through the open sunroof of a car they were both traveling in. She told the court that they were on their way back from the Vaal River when the car driven by a friend, Darren Fresco was pulled over by the traffic police for speeding. There was an issue when they got out of vehicle and Pistorius left his gun on the car seat, and a policeman removed it, cocking the gun so that a bullet fell out. Taylor said he shouted at the policeman saying he must not touch the gun.

“Oscar was very angry,” she told the court. But once they had left the scene, the two men starting joking and decided they would “shoot a robot” (the South African term for traffic light). This did not happen, but Pistorius did shoot into the air through the open sunroof of the car. While he had been “angry” about the incident, he was not angry when he shot the gun, she said.

Several other gun-related incidents were also mentioned, but it was only when Taylor, a recent ex-girlfriend of Oscar Pistorius was asked to comment on her relationship with the famous blade runner that she broke down in court and shared the fact that he had cheated on her more than once.

Samantha Taylor said she met Oscar Pistorius at a rugby match in 2010 and that they got to know each other on Facebook. They started dating in 2011 when she was 17 years old. She said they broke up twice during their relationship that ultimately lasted until early November 2012. The first time was after he had dated somebody called Anastasia when he traveled to London (to the Olympics) and New York; the second time when he took Reeva Steenkamp to the November 2012 SA Sports Awards.

Until the ultimate breakup, Taylor said that she usually spent about four days at Oscar’s home every week. Whilst on the witness stand Taylor told the court that Pistorius normally slept on the right hand side of the bed. Further, she said he always had his gun with him and would often leave it with his prosthetic legs, but never under the bed. He used two cellphones she said, one for work and the other for “private work,” which he kept with him all the time, wherever he went, including the toilet.

Prior to the court case it was reported that Pistorius’s ex-girlfriend Samantha Taylor said, “Oscar is certainly not what people think he is.” Her mother, Trish Taylor wrote on Facebook after the death of Reeva that she was relieved her daughter was “out of the clutches of that man.” There was no clear indication when Taylor broke down in court today what her emotions were. All she said was that Oscar Pistorius had cheated on her twice.