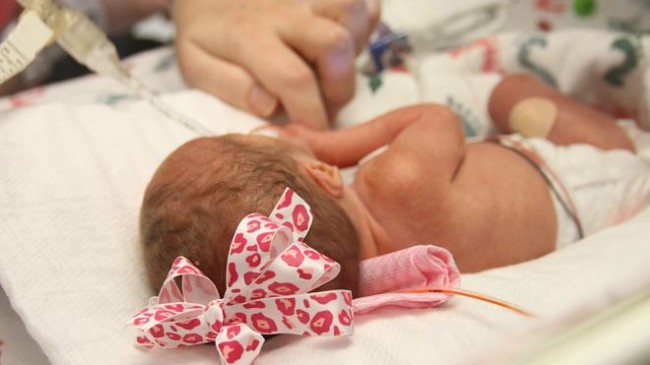 Quintuplets were born at a Dallas hospital by a first-grade Texas teacher on Thursday, March 20. The five babies were born via caesarean section at 29 weeks at Baylor University Medical Center, weighing between 2 pounds, 7 ounces and 3 pounds, 6 ounces. The proud parents, Steven and Michelle Seals, were delighted to announce that Mia, Tessa, Brant, Gracie and Rayleigh had arrived. The couple also has a two-year-old son named Brady.

The infants were breathing on their own after the birth, but were subsequently put on ventilators in order to assist their tiny lungs. It is anticipated that all of the babies except for Mia will be removed from their breathing machines soon.

The quintuplets will most likely remain in the hospital for six to seven weeks, so that their lungs can continue to develop and they can gain more weight. Mia’s birth weight was 2 lbs. 10 oz. at birth, Tessa weighed 2 lbs. 14 oz., Brant weighed 3 lbs. 6 oz., Gracie weighed 2 lbs. 7 oz., and Rayleigh weighed 2 lbs. 8 oz.

The infants are stationed in the neonatal intensive care unit of the hospital and have been drinking breast milk from a feeding tube. 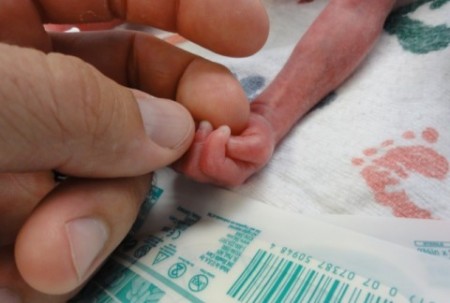 This was the first time Baylor University Medical Center delivered a set of quintuplets in their 110-year history, and the hospital a large team of trained medical professionals on hand ready and waiting for the five babies to be delivered. The quintuplets were soon born at the Dallas hospital, and the Texas teacher was ecstatic to bring them into the world.

Thirty-three-year-old Michelle Seals stated that she has undergone several miscarriages and tried fertility treatments in order to conceive. The couple decided to give it one more try, and instead were surprised with five babies.

In the beginning, Seals said she was aware that she was carrying more than one child, but she assumed that the babies would be twins. Seals would return each week for her prenatal care, and every week more babies were discovered. The mother said they were first told she was carrying twins, then quadruplets, and then sextuplets. “We were shocked,” she stated. Unfortunately, one of the babies was lost early in the pregnancy.

The mother arrived at the hospital at 23 weeks along, giving the medical staff six weeks to prep for the quintuplets.

Seals mentioned that she is eager to be able to hold her little ones for the first time, but that she has not been allowed to do so yet because their health is still too fragile. The happy mom stated that Brady has no idea how many new siblings he will have, but that she knows he will be a wonderful big brother.

The proud parents have shown their appreciation to the hospital staff for working so hard to care for their new arrivals. Dr. Vijay Nama, Director of Neonatology at Baylor Medical Center, said that the quintuplets are doing remarkably well.

The Seals family, now at whopping eight instead of three, definitely has a lot of rejoicing to do. With five mouths to feed, five diapers to change, and five different personalities to learn, Steven and Michelle Seals will definitely have their hands quite full. The quintuplets were born healthy and strong at the Dallas hospital, and the Texas teacher could not be happier.