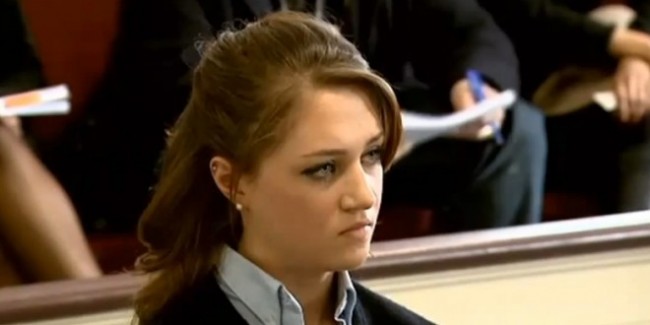 What started out as being a very public and divided case saw Rachel Canning, a smart New Jersey high school cheerleader who sued her parents for college tuition, return home March 11, 2014. The lawyer who represented her parents, Angelo Sarno, held a brief press conference today in which his clients were not present.

During the news conference Sarno, speaking for the parents, reiterated that the fact Rachel is home only means the public speculation is over; however, this is not necessarily true in the legal matter. There is great cause for speculation as to the outcome of this case as attorney John Inglesino, responsible for financing the teen’s legal suit, came under fire earlier on in this lawsuit and again earlier this week questioning his competency in his job as a township attorney for Pasippany, NJ.

Now that the prodigal daughter has returned home one could only imagine the dinner table conversations at the Canning residence. “Rachel, can you pass the potatoes and drop the lawsuit?”  “Sure, Dad, if you pass the green beans and sign the check.”  Reports from school officials and psychologists determined Rachel was abused and thus allegations that her parents coerced her to come back home and will also eventually persuade her to drop the suit. The parents’ lawyer now contends this is a family matter that should have remained private. While it is great to have hindsight, it is of little use now that the family’s dirty laundry is aired in full view for the entire world to see and public opinion is formed. The foresight to keep this matter private would have been useful when both lawyers were retained and could have then opted for private mediation.

Reality seems to have set in not only for the parents of Rachel, who have two other children at home, but also for Inglesino, Rachel’s legal financial backer, who probably has the most to lose from all the negative publicity this case has garnered. Rachel may have been labeled in media outlets as spoiled, bratty, and maybe even entitled; what 18-year-old middle class teen hasn’t been? The difference is, Rachel is 18 years old so she can attribute this to immaturity or blame it on the entitlement culture. The same cannot be said for Mr. and Mrs. Canning. They are adults who have social circles to navigate, jobs to go to, and the story of how their unruly, spoiled daughter who ran away and then sued them will follow them for years to come. Once this case went public, it shed light on their questionable parenting tactics and exposed allegations of abuse which are issues they will be forced to address.

Rachel’s financier, Inglesino, and his wife have also been accused of cultivating an inappropriate relationship with the teen for housing her for over four months, funding her lawsuit and allegedly hosting parties at their house for teens and providing alcohol. Inglesino  has yet to comment on his thoughts of the latest development that despite his support, Canning has returned home to be with her parents.

Although the legal case is still pending, the good news is the family is reunited. Perhaps this is a hard, costly and embarrassing lesson for both Rachel and her parents to learn. The old adage is true; the grass is not always greener on the other side, and if the world is invited in to see your home, there is no control for how much can be seen so be prepared for closet doors to open and skeletons to fall out. The New Jersey teen Rachel Canning is home; however, there is no word on if her lawsuit is officially closed.