Recycling of E-Waste Does Not Just Mean Recycling Mobile Phones 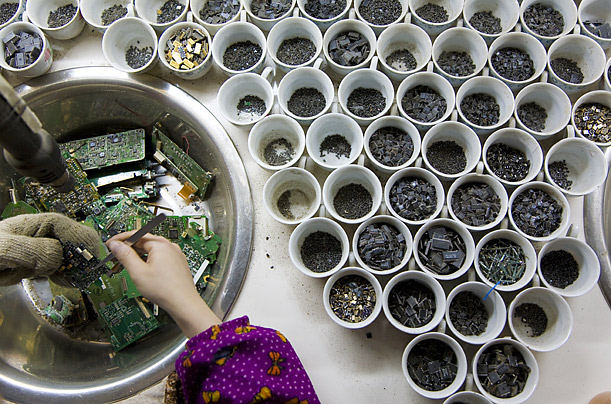 Mobile phone recycling is getting popular, as people switch to newer and better phones more frequently. The competition between cellphone service providers for new consumers leads to shorter service time of the headset under one owner. But only 11 percent of all E-waste in U.S. is mobile phones. The rest 89% E-waste does not have as much attention as headsets but many stakes are at risk if they are not properly handled. Recycling of E-waste needs to go beyond just recycling the mobile phones.

E-waste has been growing rapidly in the past decade, as more and more people in the world become affluent. Besides being poisonous, E-waste contains deposits of precious metals such as silver, gold and palladium at concentration 40 to 50 times more than dug-up ores, and other less valuable and more troubling lodes include cadmium, lead and mercury. While high-tech recyclers can recover up to 95 percent of the metal, other cheap and dirty methods in developing countries ranging from medieval methods using open fire and acid bath to 1970s methods using heated centrifuges and charcoal filters impose irresistible price difference for e-waste dumping. The global waste trade is based on 1989 Basal Convention that prevents rich countries from dumping e-wastes in poor countries. Offending cases are not uncommon. Nigeria just posed $1 million US fine on a Britain company and it was the fifth such incident in three years.

On March 6, 2014, U.S. Senator Sheldon Whitehouse (D-RI) introduced S. 2090, the Responsible Electronics Recycling Act (RERA) of 2014 to stop U.S. “recyclers” from sending toxic electronic waste to developing countries and to promote recycling jobs at home. Recycling more E-waste than just mobile phones here at home means more jobs. H.R. 6252, the version of the bill in 2011 failed to pass and it is unlikely S. 2090 would. But it will add a new chapter to Resource Conservation and Recovery Act (RCRA) to ban the export of “restricted electronic equipment” to developing nations with few exemptions. Restricted electronic equipment covers electronic equipment whole or in fragment containing toxic material like CRTs and CRT glass in any form, mercury or PCBs at any level, lead, beryllium, antimony, hexavalent chromium, cadmium, selenium, arsenic or thallium in concentrations greater than the EPA regulated limits. The passage of this bill will almost be equivalent to the ratification of Basel Convention/Ban Amendment.

E-stewards and R2 solutions prohibit recyclers from dumping e-waste to landfills, or shipping them to developing countries, among other unacceptable actions. Recyclers who are certified by one of these standards are supposed to handle the E-waste properly. Some small recyclers are not certified because it is not financially feasible on the small operation scale. So this may pose some difficulties for conscious consumers to select recyclers, particularly when they only have few options. The TV magazine 60 minutes in 2009 filmed how a Denver based company promising domestic recycling for the city’s e-waste recycling event sent shipments to China. This casts doubts on people’s mind for even organized e-waste drop off.