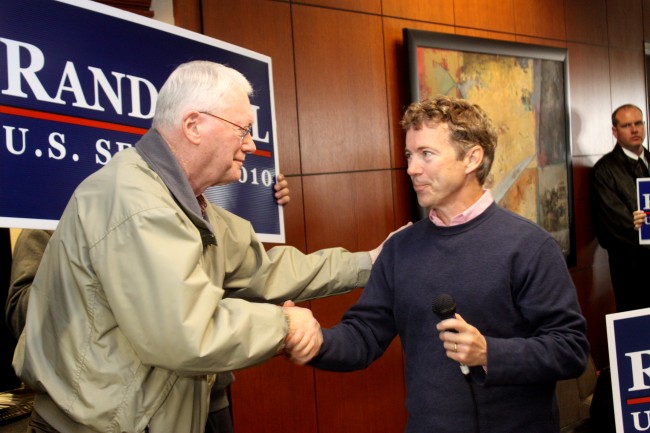 There appeared to be some clear-cut winners and losers after the Conservative Political Action Conference (CPAC) was held last week and the direction of the Republican Party would appear to be leaving Establishment Republicans behind and leaving the future face of the party in 2016 a bit more blurry. The straw poll winner of the conference was none other than the winner of last year’s straw poll, Tea Party candidate Sen. Rand Paul (R-Ky.). Paul (R-Ky.) was soon followed behind by fellow Tea Party candidate Sen. Ted Cruz (R-Tex.), leaving Establishment Republican candidates like Gov. Chris Christie (R-NJ) and Sen. Marco Rubio (R-Fla.) in the middle of the pack. This new Tea Party path to victory set after the conference only encourages the tactics used by the party to “get things done.” But these tactics used by the Tea Party, like obstructionism and nihilism, has caused a major rift within the party and Republican voters cannot seem to find a horse to bet on.

Although obstructionism is not a new tactic used in politics, this strategy (used somewhat rarely in politics before 2007) has become business as usual for Republicans. As reported in Robert Draper’s book “Do Not Ask What Good We Do: Inside the U.S. House of Representatives”, Draper reported that Republican strategist Frank Luntz “organized a dinner” on Obama’s first inauguration night January 20th, 2009, featuring seven prominent Republican representatives and five Republican Senators that were all “giddy” about a “strategy moving forward.” The meeting ended with the senior GOP members plotting to bring Congress to a standstill regardless of how much it would hurt the American economy by pledging to obstruct and block President Obama and Democrats on all legislation.

However, this strategy is proving to be more than unsustainable. Engaging in these tactics of obstructionism and nihilism have led to a dramatic shift to the far right for some members in the party, has brought new life to a once smaller outlier wing of the party known as the Tea Party and has created a new enemy to Establishment Republicans from their very own side of the aisle. Since that fateful meeting in 2009, Tea Party conservatives were more than happy to help engage in these tactics because in the past, it has always been a party who had used them in order to steer Americans away from an “overbearing” and “big” government. To simply put: a government can never become “too big” if it isn’t functioning.

At first, these tactics appeared to unite the party- Tea and Establishment – in a battle against a greater evil known as President Obama and his ‘liberal agenda’. Although you can find a plethora of examples of Republican obstructionism used in tandem by Establishment and Tea Party conservatives over the past five years, there is a more prominent and recent example from October 2013.  When Tea Party conservative Sen. Rand Paul (R-Ky.), engaging in obstructionism, intended to block a vote on now Federal Reserve Chairwoman Janet Yellen’s nomination, Establishment conservative Sens. Lindsey Graham (R-S.C.) and John McCain (R-Ariz.) promised to block all confirmation votes until more answers came about the September 11th attack in Benghazi… taking a page out of each others book in order to get what they want or to simply stymie the opposition.

However, the tide has turned quickly against Establishment Republicans like Sen. McCain (R-Ariz), Sen. Lindsey Graham (R-S.C.) and Congressional House Speaker John Boehner (R-Ohio) as of lately. The tactics laid out by Mr. Luntz have not only proved to be unsustainable for American politics left and right to control, but has now spun completely out of control and has led to an all out civil war between the newly empowered Tea Party Republicans and the Establishment Republicans. Once united under one flag in order to defeat anything Pres. Obama tried to accomplish, the recent civil war is on the forefront of the party and had led to not one, not two, not three, but four Republican responses to Pres. Obama’s January 29th, 2014 SOTU address (a far cry from the traditional one response from the opposing party).

There is no doubt Tea Party conservatives have taken this opportunity and strategy outlined by Luntz and the 2009 meeting and have run with it. And why shouldn’t they have? They now have a newfound sense of empowerment, invigorating a side of a party that used to be known as a small ultra conservative faction of the party, “too extreme for the main stream”. With Senators like Ted Cruz (R-Tex.) and Rand Paul (R-Ky.) being glorified after the CPAC from right-wing media and radio pundits as the “rising stars of the Republican Party,” the new direction in which the party wants to go appears to be muddled.

Sen. McCain again has been recently quoted in an interview with CNN describing the course of his party in regards to the way the Tea Party has handled issues like Obamacare and the government shutdown as a “fools errand,” stating that the 2012 election “has consequences and those elections were clear, in a significant majority, that the majority of the American people supported the president of the U.S. and renewed his stewardship of this country. I don’t like it; it’s not something that I wanted the outcome to be. But I think all of us should respect the outcome of elections, which reflects the will of the people.”

In a CNN report last September, head of the conservative group ForAmerica, Brent Bozell, pledged to Republican Party legislators that wouldn’t do anything and everything necessary to defund Obamacare (a task most Establishment Republicans understood to be an impossible task to achieve): “To those rank and file members playing this three card Monte game, I can say only one thing: Get ready for some primaries.”

In just the last three months, events have escalated even further. In December, in response to whether or not Tea Party conservatives should get in line, House Speaker John Boehner (R-Ohio) was quoted telling reporters, “I don’t care what they do” and that Tea Party activists and politicians are, “pushing our members in places where they don’t want to be.”

So the fact still remains, whether Establishment Republicans agreed with this strategy of obstructionism and nihilism endorsed by the party in 2009 when it was unveiled, they have nobody to blame but themselves when it comes to primary season in 2014 and the presidential election in 2016. The direction of the Republican Party after the CPAC may now seem a bit more unclear moving forward, but Establishment Republicans have to come to the realization that they have now empowered and have fed into what Speaker Boehner (R-Ohio) and other Establishment conservatives can no longer control: their own party.