Robot Economy Is Just Around the Corner 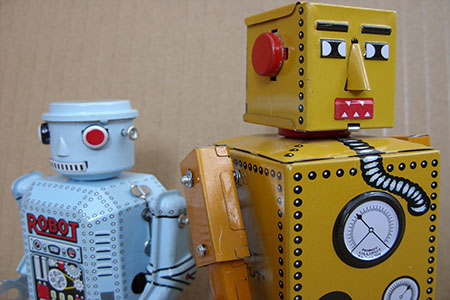 Robots today are being designed to do everything from carry heavy loads on the battlefield to work a stripper pole. Thankfully, they are still not particularly graceful at either task and so, for the time being, those jobs are still safe. Many of the people who work on the hardware and software of the future believe that a robot-driven economy is just around the corner. But exactly how will that look and which jobs will they come for first?

A study from the University of Oxford says that, within the next twenty years, half of all the jobs in America could be at risk of being automated, no humans required. The researchers started by creating a detailed description of 70 jobs and then categorized them according to whether they could be taken over by a machine. Then they applied their findings to a list of over 700 jobs in order to get an idea of which jobs were most easily duplicated.

The study ranked not only what kinds of jobs were vulnerable, but also which ones were most likely to be automated first. At the top of the list is loan officer, with a 98 percent chance of being automated in the next twenty years. Receptionists and information clerks ranked second with a 96 percent chance of being replaced. Paralegals and retail sales persons ranked third and fourth with a 94 percent and a 92 percent chance, respectively.

As it turns out, while robots are good with information, they are not great when it comes to learning social and creative skills. So, the jobs that are the most robot-proof are jobs like physicians and elementary school teachers, lawyers, and musicians and singers, in that order. Doctors and surgeons have the lowest chances of being automated in the coming decades, at only .o4 percent.

But what if robots do start to come after your paycheck? What can you do? Well, if Bill Gates is to be believed, your best bet is to start changing the tax code. During a recent talk at the American Enterprise Institute Gates said that he felt that “software substitutions” were coming because, over time, technology will always reduce the demand for labor. But he also said that most people were not really thinking about it much, yet. One idea, he proposed, is to make the shift from taxing income, to taxing consumption. Since human labor will be playing a smaller role in the economy, that probably makes sense.

But not everyone agrees that the robot economy is just around the corner. Some economists have been looking at statistics on productivity and capital investment and have noticed that neither one is rising all that much, which is something they would expect if there were more robots out there, doing jobs more efficiently than their human counterparts.

Finally, there are some who think that this “robot-economy-is-just-around-the-corner” scenario is really just one big smoke screen. In an article in the National Journal Dean Baker, co-director of the Center for Economic and Policy Research says that this robotic doomsday scenario could just be a convenient way for policy makers to shift the blame away from themselves. After all, he says, levels of poverty are the results not just of technology, but of public policy and those decisions are made by humans, not robots, for now.