Secret Service Has Its Own ‘Secret’ Museum 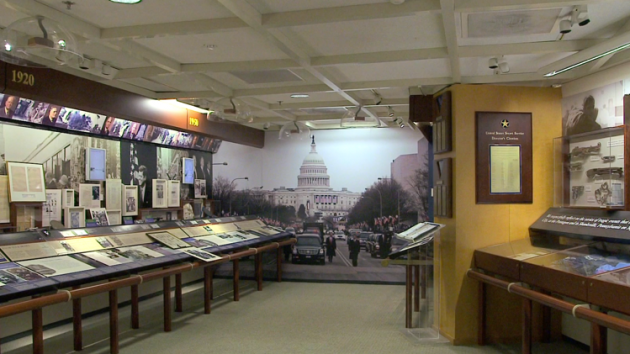 Inside the H Street Washington D.C. building that houses the headquarters of the United States Secret Service there is a beehive of activity generated by federal employees and special agents. Tasked with the critical mission of preventing fraud and the protection of the president, vice president, their families and other higher-ups, the 6,000 employees in the building have much to occupy their time. However, one of the perks of having access to the building is the ability to visit the government agency’s “for their eyes only” museum. After a quick tour of the one room wonder that houses everything from counterfeit bills to Tommy guns, these employees can also grab a quick meal at the Secret Service Café, which offers delicatessen menu items.

The existence of the “secret” museum is a cat let out of the bag long ago but access to it is extremely limited and excludes the public. Its location will not be found on any tourist map and as the building is unmarked, even passersby would have no idea what secret artifacts the building houses. In fact, the museum is considered one of the most hush-hush in D.C. although the Central Intelligence Agency’s (CIA) own “secret” museum is giving it a run for its money.

Many of the artifacts contained in the museum are reminders of just how dangerous it is to be a high-level public servant. Marking the attempted assassination of president Ronald Reagan is the bullet-pocked limousine window, which was hit by one of would be assassin John Hinckley’s bullets. The window is a concrete reminder of Hinckley’s heinous act, while the memory of the bullets that hit Reagan and his officials lives on in the minds of Americans with or without the museum artifact.

Also on display are certain firearms including a Tommy gun, which was the original gun issued to Secret Service agents in the 1960’s and an assault rifle used by Francisco Martin Duran who shot at the White House 29 times in 1994 after traveling across the country to reach his intended target. The museum has Duran’s map that highlights his violent intent and delusional state with annotations about killing the president and religious confusion about God, the devil and the role of humankind.

Clint Eastwood makes an appearance in the museum in the form of a seven-minute long video based on the role he played as a Secret Service agent in the film In the Line of Fire. In the film, he played a man who was haunted by his failure as an agent tasked with protecting President Kennedy who was assassinated. In addition, along one wall of the museum, the 35 agents who have died in their service to the agency since its inception in 1865 are memorialized.

The original mandate of the Secret Service was to prevent the counterfeiting of U.S. currency and to safeguard the nation’s financial systems. In that light, the museum contains evidence of counterfeiting including the printing press used by Hungarian con man Count Victor Lustig, also known as the man who sold the Eiffel Tower twice. Lustig and an accomplice masterfully printed hundred-dollar bills during the Great Depression until he was turned in to the authorities by his jealous mistress who, while having no issue with his being a counterfeit cheat, did not take kindly to his cheating with another woman. Examples of Lustig’s work and that of other counterfeiters decorate the walls inside the museum.

Given that the United States Secret Service is known for its necessary clandestine behavior, it is no wonder that the artifacts that mark their covert activities are kept in a restricted access museum. Those with a burning desire to get into the museum have the option of applying for employment via the special agent recruitment applications on the official government website. Barring actual employment with the Secret Service however, it is unlikely that the average citizen will ever lay eyes on the historical American artifacts housed by the clandestine agency. While their museum is perhaps not “top-secret” it is at least mostly secret.

2 Responses to "Secret Service Has Its Own ‘Secret’ Museum"