Taiwan Protest of 350,000 Outside Parliament Over Trade Bill With China 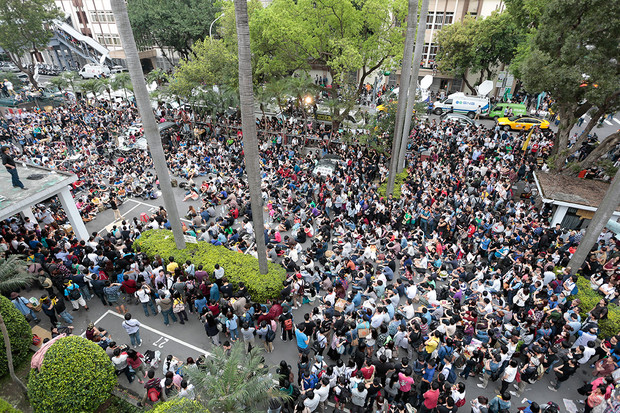 Sunday, in Taiwan’s capitol, 350,000 protesters staged a sit-in outside of the parliament building. The protest began as part of a student-led initiative called the “Sunflower Movement,” which sought to repeal or alter the new trade bill that Taiwan struck with mainland China. The large sit-in protest comes on the heels of a student-led occupation of the parliament chambers that has lasted around two weeks. The 350,000 strong protest outside of the parliament chambers over the trade bill with China has left the government of Taiwan struggling with what to do about the bill.

The new trade bill in Taiwan, endorsed by Taiwanese president Ma Ying-jeou, could bring some peace to the tricky situation between Taiwan and mainland China. The bill allows for Taiwanese financial, health, and food-related industries to do business across the Strait of Taiwan with the mainland. The Sunflower Movement sees an essential problem with this plan, however. They argue that the new bill favors large corporate entities, and leaves smaller businesses out of the picture entirely.

The Taiwanese government does not see eye to eye with the Sunflower Movement. The government in Taipei likely sees this as the first bold move toward easing tensions with the People’s Republic of China.

Ever since Taiwan split with mainland China about sixty years ago, tensions have been extremely high. Beijing has patrolled the Strait of Taiwan diligently, and often has threatened Taiwan with invasion and annexation. The 350,000 protesters outside of Taiwan’s parliament do not seem to be concerned over this seemingly beneficial aspect of the new trade bill with China.

President Ma Ying-jeou has stated that he is against repealing the new pact between China and Taiwan. In addition to improving the abysmal relations that the two countries have had over the past 6 decades, Ma feels that the pact is necessary to strengthen the Taiwanese economy, and to increase competitiveness with South Korea and Japan. Furthermore, Ma feels that a failure to keep the pact in effect could seriously harm future trade agreements between Taipei and Beijing. Improving relations between the two countries has been a central aspect of Ma’s presidency since his first election to office in 2008.

The protest has not been entirely peaceful. Police ousted one group of students from an area in parliament with fire hoses and violent beatings. The length of time that the protest has already gone on is unprecedented for a governmental-stoppage movement of this magnitude. It can only be hoped that the protests remain as peaceful as possible. The President of Taiwan has tried to reach out to students in order to hear their demands, but students refused.

Tensions rise over the situation, as an end to the protest continues to appear uncertain. The 350,000 protesters that appeared outside of the parliament building on Sunday represent many citizens of Taiwan that are angry about the new trade bill with China, and some sort of resolution remains absolutely necessary to restore democratic processes in Taipei. President Ma’s determination to open up trade over the Taiwanese Straight may not resonate with the population, as his approval rating is at a dismal 9%. Citizens seem to be favoring a continued separation with mainland China in order to preserve Taiwan’s business independence.