Tattoo Covered Man to Laser Off and Start Again 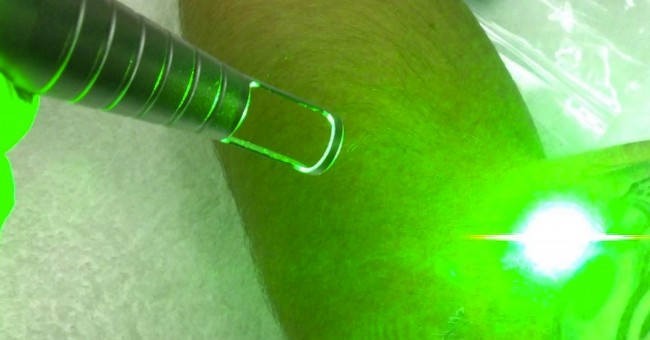 Tattoo covered fellow Matthew Whelan is a man on a mission. After spending an incredible £30,000 ($47,000) canvassing his entire body in ink, he wants to laser off the artwork and start the whole process again. Perhaps not entirely convinced with the first layer of shapes and color painted onto his skin, he has set aside a small fortune for the painful removal procedure that will afford him a replica of the human-shaped canvas he started off with all those years ago.

Whelan, who changed his name by deed-poll to King Body Art The Extreme Ink-ite, got his first tattoo of a British bulldog aged just 16, and two decades later feels as though a clean slate is required to continue fully expressing himself artistically. “After a while the art gets old and people want to see something new and that’s how I feel about my tattoos,” he said, before describing his body modification as a culture and a way of life.

Mr Extreme Ink-ite is a former wrestler with a taste for the whimsy in life. His left eye for instance, consists of a pupil, an iris (much like every other human) and then a sclera that is black in colour instead of white, gleaming like a sphere of oil atop his tribally decorated cheekbone. Of course, this feature is in itself slightly contrary to the normal way people choose to wear their eyes, but what pushes such a look further into the realms of oddness is that his right eye remains completely untouched, perhaps in an attempt to keep some semblance of regularity to an otherwise multi-coloured appearance.

Also offering his presence to the opposite end of the eccentricity spectrum, Matthew is also a trusted Liberal Democrat volunteer, proving his quirk is more than matched by his political ideology. The fact that this tattoo covered man is to laser off his ink and start again appears only to crack the surface of his extravagance, although it may also be one of the finest examples yet that you simply cannot judge a book by its cover.

“Some of my friends think I’m bonkers, and it might seem odd to some people but to me I am a living canvas,” he explained, “I can’t wait for the day to put new artwork in their place”.

Matthew first became infatuated with tattoos at the age of nine, when he saw his father’s and uncle’s body art. Despite having only just started the gruelling process of tattoo-removal, he has already got an idea of what he wants to replace it, with snakes and vampires featuring among the list of new additions.

Unsurprisingly, Whelan’s unique appearance has not gone unnoticed in this modern world of instant media sharing and social networks. “There’s someone in Canada who has already asked me if he can have my skull to use as a paint pot,” he stated, obviously raising the question as to whether this Canadian gentleman is aware that tattoos do not affect bone appearance in any way. Whelan seems willing to honour the request, so long as it’s prior to his passing.

In opposition to some that may find such an exercise futile and unnecessary, this tattoo covered man who is ready to laser off his work and start again is just another example of artists finding a way to evolve their creativity in an ever changing world where people have to try a whole lot harder to get noticed.