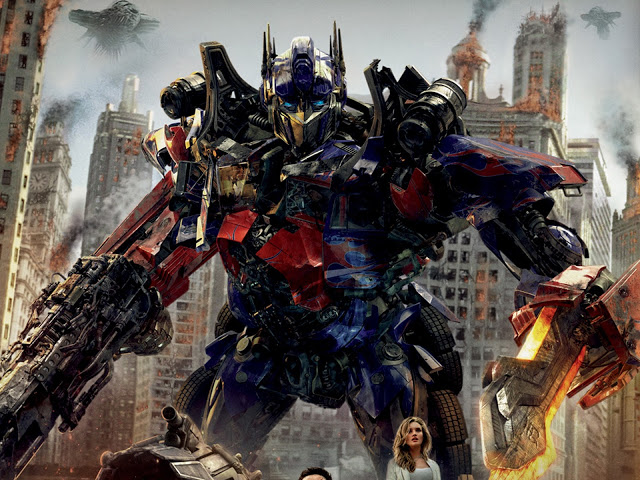 The Transformers 4 Trailer has just been released. Titled Transformers: Age of Extinction, the Paramount Pictures production stars Mark Wahlberg, Nicolas Peltz, Kelsey Grammar and Stanley Tucci and is directed by Michael Bay. The trailer, with its revamped Optimus Prime, explosions, dinobots, heroes under threat and armed vehicles, is sure to tantalize Transformers fans and even lure some new ones.

The trailer starts out with farmer Cade Yeager, played by Wahlberg, coming across an old truck and bringing it home. Despite his daughter telling him he cannot keep bringing home junk, Cade sets about repairing the truck, telling his daughter, Tessa, (Peltz,) the old parts are going to be what puts her through college. Cade is then shown sitting on his porch, saying how much he needs something to bring his family money, before asking the old truck to bring it to him, telling the truck it is judgement day. As Cade starts going about taking apart the truck, he senses something is not right. First, he finds old bullets inside the machine. Next, he and his friend start to realize the steel is abnormal. Then it hits them. They have found a transformer. And not just any old transformer either, but the transformer: Optimus Prime.

At this point of the Transformers 4 trailer, Michael Bay’s name fills the screen. Michael Bay, a veteran action movie director with Armageddon and the three previous Transformers movies to his credit, has stamped his style all over the production as firmly as Optimus Prime stamps his feet as he strides into battle. The screen cuts to special agents arriving to the farm, Tessa calling for her father, the American flag waving in the wind behind her. The agents ask Cade where Optimus Prime is. Cade responds ominously, they have a rule about messing with people from Texas. An agent then throws Tessa to the ground, sending her crashing onto a scooter bike. Cade looks up from the ground close by her.

Then the first explosion comes. The garage where Prime is kept blows up and the Transformer somersaults out of it. Optimus Prime lands on his feet, weapons at the ready. The screen cuts to a shot of the skyscrapers of Mission City and then cuts to Harold Attinger, (Grammar,) as he tells us a new age has begun and the age of the Transformers is over. The screen cuts to military guards firing at Transformers who fall to the ground amid explosions. The under-attack Transformers are next shown getting ready for battle and Joshua, (Stanley Tucci,) tells Optimus Prime he is not needed any more. As the tension builds, the words The rules have changed fill the screen.

Prime has other ideas about being needed or not though. The recently released Transformer 4 trailer then shows Prime hovering about Mission City like a UFO, Cade and Tessa in the street below, looking up, terrified, American flags wave once more in the background. As the pulsating electronic music escalates, Prime is shown moving across ground, Tessa looking his way, Cade hiding behind a vehicle, inches from Prime’s crashing feet. Shots are fired from Prime’s gun. Buildings explode. More Transformers arrive. Tessa, trapped in the carnage, screams for her father. Cade confronts the agents, telling them they should have left his family alone. Citizens run out of exploding buildings. Transfomers arrive in the city. Tucci screams “Oh My God”. Optimus Prime roars and annihilates a dinobot in the jungle. The dinobot rolls to the ground, its head in flames, before the screen cuts to the title Transformers: Age of Extinction.