Ukraine: Obama Makes Statement on Crisis and Costs to Russia 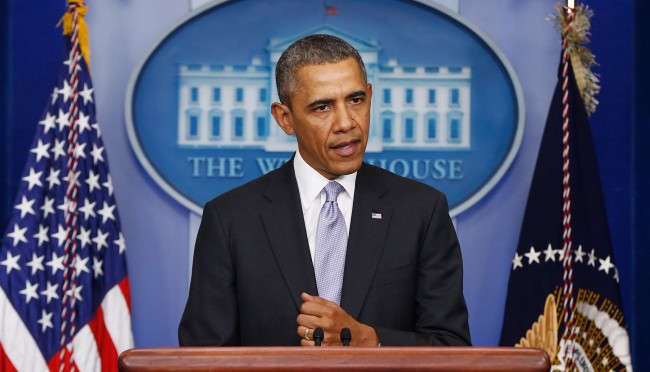 President Obama held a press conference from the White House addressing the crisis in Ukraine today and the costs to Russia. His statement was short and succinct and laid out the path to deescalation for Vladimir Putin and the Russians.

“Since the Russian intervention, we have been mobilizing the national community to condemn this violation of international law and to support the people and government of Ukraine,” Obama said. The importance of adhering to international law has been touched on many times by Secretary Kerry in the days leading up to this statement, and Obama is doubling down on that notion. In response to the violations, the President laid out the “costs” to Russia for their transgression.

Obama noted he signed an executive order authorizing sanctions on individuals responsible for “violating the sovereignty and territorial integrity of Ukriane.” He continued, “The State Department has put in place restrictions on the travel of certain individuals and officials.” He then touted the strategic worthiness of his decisions in the long game, saying, “They give us flexibility to adjust our response going forward, based on Russia’s actions.”

Both sides of the aisle here at home agree that economic ramifications are necessary against Russia, but many have also said that cooperation from European countries and the EU is paramount. The President reiterated that importance, saying, “We took these steps in close coordination with our European allies,” and reinforced the idea of “international unity.”

Beyond the costs for Russia, Obama also laid out his plan for Ukraine during this crisis, making way for “substantial assistance for the government in Kiev.” That assistance he referenced will be in the form of a $1 billion dollar loan. He then laid down terms of all negotiations over Ukraine, saying, “Any discussion about the future of Ukraine must include the legitimate government of Ukraine. In 2014 we are well beyond the days when borders can be redrawn over the heads of democratic leaders.”

Obama moved on to talk about the steps to deescalation for Putin in the interest of respecting both the Russian Federation and Ukraine. First he demanded that Russia allow international monitors in to Crimea that will “insure the rights of all Ukrainians.” Second, he reiterated the importance of international support and cohesion, saying consultations must begin “between the government of Russia and Ukraine, with the participation of the international community.” The President continued moving forward with caution, carefully measuring his words towards Russia, and made assurances for their military assets, saying, “Russia would maintain its basing rights in Crimea provided that it abides by its agreements.” Crimea is the only warm water port near Russia that Putin has access to. The President also commented on the importance of undeterred Ukrainian elections that will happen in May.

Obama’s threat-rhetoric to Russia ramped up slightly towards the end of his statement when he said, “If this violation of international law continues, the resolve of the United States, and our allies, and the international community will be firm.” To reinforce that, he called on Congress to act and approve the loan so Ukraine can “weather this storm and stabilize their economy.”

Obama’s statement lasted jut five minutes and he took no questions after about the crisis in Ukraine or his outline of costs to Russia, but instead left that responsibility to Jay Carney, the White House Press Secretary. As decision-making goes, it seems the ball is now back in Putin’s court.