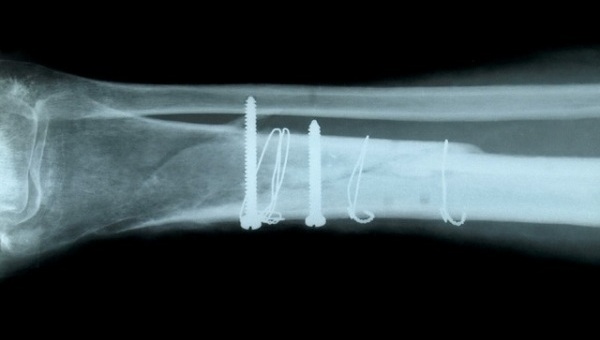 The current standard for medical fixation devices is a metal alloy. When a patient suffers from a broken bone and requires screws or plates to be inserted in order for the breaks to bond and heal correctly, the surgeon must generally use metal. Metal screws and plates have problems which include temperature sensitivity, stress to the underlying bone, and increased infection risks. Some procedures require a follow-up surgery so the metal implant may be removed. Synthetic polymers are sometimes used in lieu of metal as they are resorbable but these devices may increase the risk of inflammation. New research indicates that it is possible to make surgical screws using the silk protein found in silkworm cocoons.

The Tufts University School of Engineering and Beth Israel Deaconess Medical Center have a team of researchers investigating the development of silkworm cocoon protein into surgical screws and plates. These silk-based resorbable surgical devices not only alleviate issues regarding stress shielding but also promote bone remodeling while they remain in place for a period of four to eight weeks. Current resorbable screws carry the risk of serious inflammatory responses. This response is minimalized with the silk devices.

One of the study’s authors, Dr. Samuel Lin, Associate Professor of Surgery at Harvard Medical School and part of the Division of Plastic and Reconstructive Surgery at Beth Israel Deaconess Medical Center, says that not only are the silk materials robust, they may be similar in composition to bone. He continues on to say that the silk-based devices can be readily sterilized and withstand extreme conditions while maintaining structural stability.

Other study members include co-author David Kaplan, PhD who is the Tufts chair of biomedical engineering, as well as a contingent of engineers, both mechanical and biomedical. This group came together to investigate the feasibility of being able to make surgical screws and plates using silk proteins from silkworm cocoons.

This is not the first product that Kaplan and his engineers have developed using silk. The team has previously made foams, fibers, and sponges for clinical and operating room use. They believe that another advantage to be gained from using silk in medical products is its ability to deliver antibiotics, pharmaceuticals, and other bioactive components. Therefore, the silk devices themselves would be used to transport and distribute additional therapies. While the team has already manufactured the foams, fibers, and sponges, there has not yet been any silk-based solid medical apparatus, such as screws or plates for fracture stabilization.

The current research utilized the silk protein from Bombyx mori silkworm cocoons. The protein was then folded in complex and specific manners in order to create not only strength but also versatility. The resultant surgical screws were implanted in laboratory rats with no implantation failures. Even when the screws were in contact with fluids, as well as with surrounding tissues, they did not swell and furthermore, they maintained their mechanical coherence.

The outcome of the research and the subsequent trials with the laboratory animals suggests that using screws and plates made out of silk can be beneficial to surgical patients. The post-surgical follow-up surgery to remove the implanted devices would be alleviated as well. In addition, the possibility of inflammatory responses to the devices would be lessened. The current goal for using these silk surgical screws is to make treatment of facial injuries less traumatic. Facial injuries necessitating surgical implants number several thousand every year.

One Response to "Using Silk to Make Surgical Screws"