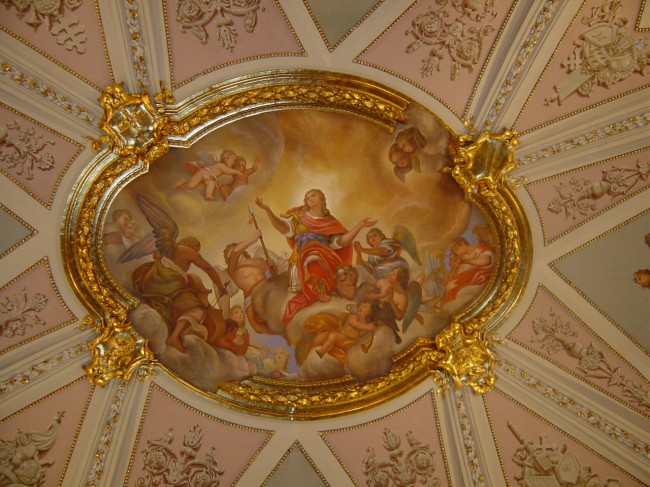 The Victoria and Albert Museum in London surveys early Georgian Britain with a new exhibit, William Kent: Designing Georgian Britain through July 13, 2014. This exhibit looks at how the architect, William Kent came to hold the principal position in instituting a new design aesthetic during this crucial period when Britain identified itself as a new empire.

Encompassing four decades (1709-48), the exhibit abounds with antiques and art from Britain’s most prominent estates. The exhibit illustrates the political and social maneuvering of the Georgian period. The new dynasty looked to strengthen its status and power through the artistic ingenuity of William Kent.

William Kent, a leading designer and architect of early to Georgian Britain, changed his focus from painting to concentrate on a myriad of other disciplines including designing sculptures, furniture and interior decoration, architecture, metalwork, theatrical and costume design, and landscape gardening.

Drawn by the allure of Italy, Kent studied in Rome from 1709 to 1719. There he replicated Old Master paintings and practiced etching and engraving techniques. In the course of his stay, he met the third Earl of Burlington, Richard Boyle who would later become his most distinguished patron, and would procure a series of career-defining commissions for Kent in England.

One of the main reasons Kent cherished his English clients was because they had a deep nostalgia for Italy. He was inspired by the opulently decorated Baroque interiors of the palaces that his patrons had loved. Kent’s characteristically heavy gilded furniture and interior designs became known as Kentian. 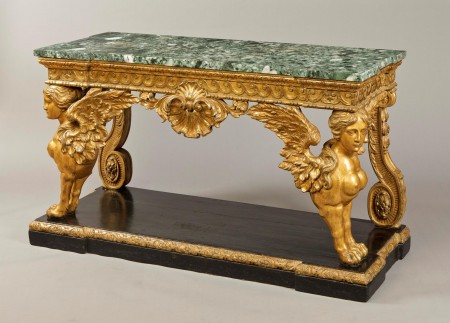 When Kent returned to England, the country was going through a transformational time. In 1714, the last Stuart sovereign, Queen Anne had died, and the Hanoverians, guided by George I, became the new reigning empire. It was out with the French ideal, and everything connected with the Stuart dynasty became passé. The pursuit for a new style to define the United Kingdom was underway.

Lords and ladies appreciated Italy for its architecture, design and art. The wealthy were convinced that a fresh focus in art and culture, most notably Italian, could transform and improve society, overall.  They spread their notions in literature and journals that encouraged the exchange of ideas expanding art to the middle class. It was through this milieu that William Kent was able to propel his new career in Britain.

With the assistance of his patron, Lord Burlington, Kent advocated a melded design style inspired by the classical architect, Vitruvius Britannicus, Italian architect Andrea Palladio and the British architect, Inigo Jones. There became a public awareness of architecture. Burlington commenced to design buildings for himself and his friends, centered on the ancient models. The first major work was his Piccadilly family home. Lord Burlington also sponsored publications to promote this new Anglo-Palladian style.

William Kent also initiated his strategy. By 1725, he was the first British designer to work on interior design at such a scale. In his renderings, his interiors included fireplaces, furnishings and even picture frames. He began designing interiors for the Essex’s Wanstead House, Norfolk’s Houghton Hall and Lord Burlington’s Chiswick House, considered a “three-dimensional piece of stage scenery” that was entirely devoted to the sole purpose of fostering the artistic style.

The designer, William Kent moved on to furnishings and interiors for the London residences of leading political figures. His timing was impeccable because his work coincided with an increase of the Georgian governing class spending only half a year in the city of London, but also owning a “country seat” for entertaining. Their lavish homes became a stage where respectable visitors came to view the interiors and the owner’s collections.

Lord Burlington understood that the assured method of strengthening his Anglo-Palladian style was getting it into public buildings. As if in unison, George I recognized the marketing value of uniting with the “reformed national style” and exploiting it to strengthen the rightfulness of their empire.

Through the benefaction of the new cause, William Kent came to lead the artistic direction of the Hanoverian dynasty. As the first generation Palladian, Kent’s position was critical “in an age when so much depended on aristocratic and royal patronage.” Michael Jenner, author of London Heritage sized it up as, “The Age of Taste had arrived.” Kent’s efforts can be seen in the Treasury and the Horse Guards in Whitehall.

His first Royal commission was painting the new staterooms in Kensington Palace, and for the remainder of his life, the designer enjoyed the Royal family’s support.  In 1732, Fredrick, Prince of Wales granted Kent the official title of Architect to the Prince of Wales.

Kent did not limit his contribution to Britain with his Anglo-Palladian interior style, he also undertook building projects working in the Gothic style, and carefully crafted gardens he translated from pastoral landscape paintings by artists such as Jean-Antoine Watteau.

William Kent’s artistic eye, together with his Italian training and vision, made the painter-cum-architect, paramount to facilitate and benefit from Britain’s new empire. His ability to confidently “navigate the patronage system” and use his versatile talent to realize a dream, confirms his status as the creative genius of the redesign of the Georgian era.

London Heritage: The Changing Style of a City