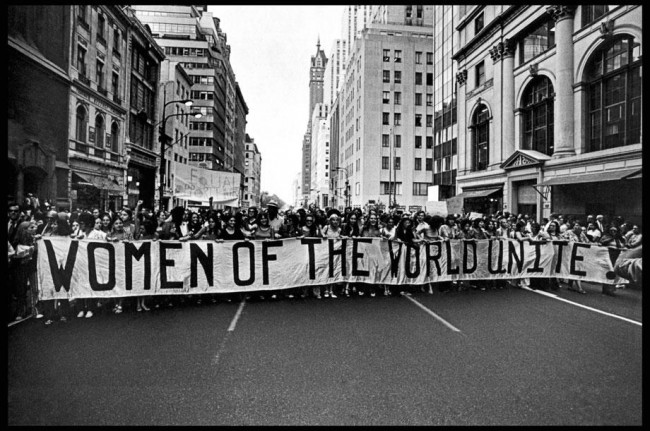 For centuries, women have striven for an ever illusive sense of equality in this world. The first women’s rights movement took place in Seneca Falls, New York in efforts to better the situations for women. These women were united by a common goal: to have access to the same types of things to which only men were privy. Rights that are commonly taken for granted in the modern age, were fought for with the blood, sweat, and tears of these matronly harbingers of freedom.

In her petition for women’s rights, the “Declaration of Sentiments, Grievances, and Resolutions”, Elizabeth Cady Stanton powerfully penned the 13 items that served as great obstacles to women’s ability to do much else in the world other than marry and keep house. Using the preamble to the United States’ Constitution, Stanton reminded the men she petitioned that America was founded on the following phrase: “We hold these truths to be self-evident: that all men and women are created equal.”

Women of the Suffrage Movement were passionate about addressing and answering one question:why was there such a great divide between men and women concerning their eligibility to dream? It seemed to them that the ability to achieve their own success was a basic human right that had been denied them.

Before this meeting in 1848, women were banned from receiving a college education for no greater crime than having been born as a female. The Women’s Suffrage Movement was also backed by some men, predominately those who were involved in the abolition movement against slavery. Lucretia Mott was a Quaker abolitionist who was married to James Mott- the man who presided over the entire campaign.

As time progressed, women began to receive some of the rights they longed for, but progress was not instantaneous. In fact, though women had finally earned the ability to go to school, societal pressures and expectations said otherwise. In essence, though women had earned rights and were free to pursue them, they achieved their goals quite often at the cost of respect and support of society and their loved ones.

In the 1950’s, the American culture was fraught with the aftershock of war. Women were condemned as aligning themselves with communism if they did not stay home and remain a proper house wife, happily pumping out perfect meals and babies year after year. Many were happy to live their lives in this way, but there were some who dreamed of a different outcome. This remained an active struggle for human rights throughout the decades to come.

Those who did not fit into the mold were labeled as “manly”, “unnatural”, “communists”, or “lesbians” just to name a few. All this was only because they had the same aspirations to partake in a world ripe with possibilities as only the men enjoyed and wanted to be a part of it all.

Regardless of what a woman’s motivation has been for equal treatment, their efforts have been duly noted. However, women’s rights still remains an issue today. Women still do not have freedom the world over. Many women in various cultures are still dominated by governments and societies that will not recognize their need to be free. Like minded women continue to fight for the continuation of human rights via effort for women’s rights for which their ancestors toiled.

It is there hope that one day, a generation of young women will face the world with an outlook of all the hope and promise that their futures will hold, rather than being forced to live within the confines of a society that tells them they are not good enough because they are women. Women’s rights, to many are equal to basic human rights.