Yoko Ono Celebrates With a Retrospective at Bilbao Guggenheim 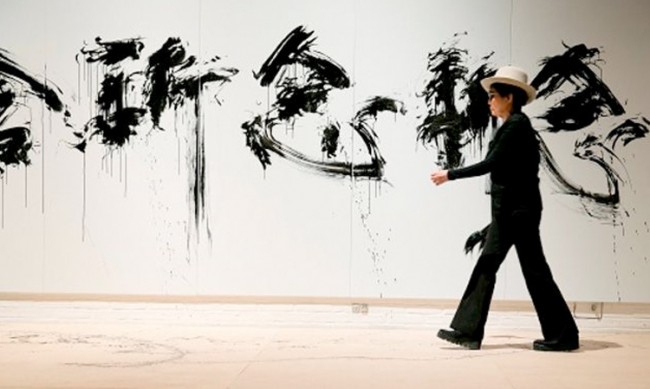 Yoko Ono commemorates her 80th birthday with a retrospective of her work.  Yoko Ono: Half-A-Wind Show at Bilbao Guggenheim runs until September 1, 2014. The exhibit highlights Ono’s work from the mid 1950s through present day.

Nearly 200 pieces are presented in sections on Guggenheim’s third floor, and include objects, experimental films and photographs, text and audio, installation, and documented performances.

At 80, Yoko Ono is an innovator. She has generated not only conceptual and performance art but intangible and perceptible ideas for nearly six decades. All of her concepts are expressive. Some are somewhat idealistic, while other conceptual works are profound and, even achievable.

Her artistry began with early musical training at Myonichikan at Jiyu Gakuen (School of the Free Spirit) in Tokyo. There, she was trained to listen to sounds she heard throughout the day and translate each one into musical notes. It became almost a precept for Yoko Ono.

Much later, in New York, Ono had an epiphany. According to a 1992 Imagine Peace interview, she said that she found herself instinctively trying to translate a “symphony of birds.” At first, she realized it was too complex. Then, she understood that it was not an issue of ability, but more of how music was scored. Ono noted that if an individual desired to introduce the beauty of “natural sounds into music,” they did not have to create sound with traditional methods. As an alternative, she blended musical notes with instructions.

This new understanding became the natural segue for Yoko Ono in her work, whether it was an interactive installation, music, sculptures or paintings. Instead of a performer reading the score and trying to play it exactly as composed, she allowed the viewer to interpret her art as closely or as comfortably as they believed was agreeable to them.

Through the decades, Yoko Ono’s work has been, from time to time, humorous. Often, it raises social, global or political awareness, sometimes with biting disapproval. Peace and feminism have always been a precursor for Ono, and her pieces are often stirred by personal and universal questions. She always encourages self-contemplation and the exploration of the mind’s potential.

Within her broad scope of mediums – poetry, art and music to video, dance and performance art – her work has always challenged conventional ideas and the power of imagination. She often requires physical or mental participation of the onlooker. Without interaction, her work would be deemed “lacking.” As part of her art, she frequently establishes written, typed or oral guidelines, such as “participate,” “reach,” and “imagine,” so the result is always an open interpretation.

An example of her interactive installations can be observed in her current exhibit piece, Moving Mountains. Ono requests that visitors “enter bags to form mobile sculptures” within the space while listening to her track, Moving Mountains. Yoko Ono explained that to move a mountain not only does not require words, but is “beyond words.” What matters most is “emotion and intent.” 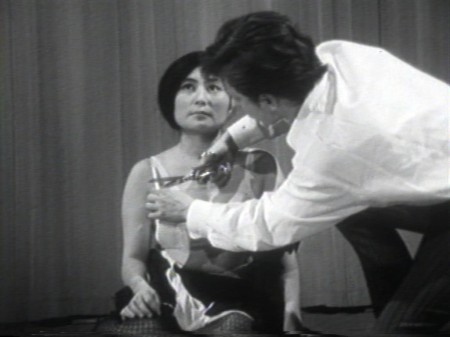 This exhibit opens with her most noteworthy creation from the 1960s, including first performances, and artwork. Her first public appearance in 1959 with Lighting Piece commenced her journey as an independent artist where she became involved in the avant-garde presence in New York City. She was close to other artists and filmmakers such as the Lithuanian filmmaker-artist, Jonas Mekas, and George Maciunas, the Fluxus movement founder.

The retrospective also includes, Instructions for Paintings composed of two distinct functions, “the instructions and the realization,” according to Ono. An example is her conceptual piece, Painting to Be Stepped On (1960). Unlike a wall painting, Ono’s work involves a unstretched canvas fixed to the floor with a note. Most artworks in a museum, state, “do not touch,” however, her piece encourages visitors to tread on the canvas.

Another conceptual piece, in the exhibit, reportedly united Yoko Ono and John Lennon. Ceiling Painting (1966) consists of a stepladder that guides the visitor up the steps to a suspended spyglass with the tiny word “yes” written overhead.

The Half-A-Wind Show also emphasizes her performance pieces such as her 1964, Cut Piece. In this performance, Ono sat kneeling on the ground. Dressed in her best outfit, she placed a pair of scissors in front of her. One by one, audience members approached her to snip a piece of her clothing. Ono remained motionless.

Visitors also have the opportunity to consider her films. During the 1970s, Yoko Ono created experimental (minimalist) films as a member of international Fluxus collective. They included shorts such as One, a five-minute slow-motion sequence of a match being struck, and the controversial 1967 Bottoms, drawing attention to the backsides of London swingers.

Lastly, an area of the exhibit is dedicated to Yoko Ono’s concert recordings, music and ephemera, including collaborations with her son, Sean and other artists. As one of the most influential artists of conceptual art, Yoko Ono’s work has pioneered innovative concepts, and her current retrospective, Half-A-Wind Show, at Bilbao Guggenheim, demonstrates that she can not only imagine change, but also inspire it.