Agents of SHIELD: Captain America Best Season Tie in Ever 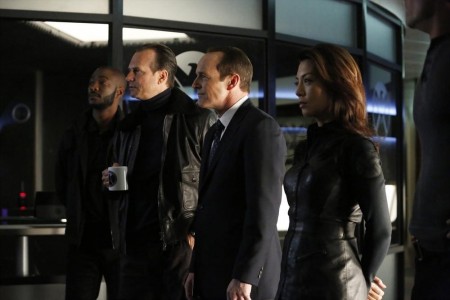 Last night’s 16th episode of Agents of S.H.I.E.L.D. was the episode that fans of the television show and big screen Marvel hero films had been waiting for; the Captain America tie in was the best ever. Of course it was pretty much sign posted in last week’s episode’s by the closing moments when it turned out that Agent May was keeping an eye on Agent Coulson and reporting on his actions.

That little shocking reveal put one of the most trusted members of the team in position of turncoat, or at least, someone whose motives were suddenly now very questionable. Also in last week’s show, Phil was adamant that he wanted to speak to S.H.I.E.L.D. head Nick Fury who was, “off the grid.”

This pointed to the fact that Samuel L. Jackson would be appearing in the very near future in the television series again. Fury showed up to “rip a strip” off of Coulson in episode two: 0-8-4 about the team’s rough treatment of their flying headquarters.

The other, very obvious, signpost was not in the series at all. Rather this foreshadowing did not have anything to do with the TV show apart from association. It has been impossible to turn on the television and not see a trailer for Captain America: The Winter Soldier which opens across the U.S. on April 4.

After the shocking news that May was not what she seemed, the team assemble to zero in on the Clairvoyant. Bill Paxton and B.J. Britt return as John Garrett and Agent Triplett respectively, and more S.H.I.E.L.D. agents from headquarters are requested to be at the plane.

Saffron Burrows returns as Victoria Hand, the big boss with the personality of a lizard and real issues with Agent Garrett. Also along for the ride are agents Blake and Sitwell. After Skye is made a S.H.I.E.L.D. agent she sets up several teams of two to track down the Clairvoyant and Deathlok, aka Mike Peterson.

When the Agents of S.H.I.E.L.D. split up, the team of May and Blake come into contact with Deathlok and the male member of the team gets badly injured as a result. Shortly after, it turns out that Nick Fury is now “back on the grid,” this information was helpfully passed onto Phil Coulson via May. This clearly signposted the next big screen tie in, but this time the show parallels Captain America: The Winter Soldier in the best season tie in ever.

Before Fury makes his appearance, in the show, it becomes apparent that whatever changes were made to Deathlok in his transition from Mike Peterson to partially robotic and practically unstoppable killing machine, a small part of the man is still in there. Despite his statement that Peterson is dead, his face says otherwise.

May’s seemingly treacherous actions are brought to light by Fitz and there is a very terse standoff between Phil, Skye and Agent May. While Coulson is working out that the man shot by Ward was not the real clairvoyant, the flying headquarters is taken over and moved to another location.

The show cuts to Victoria Hand who tells her minion that they are to “take care of everyone on the plane, except for Coulson.” Phil, she says, is for her.

This show has been steadily picking up its pace as well as tying into the big screen connections. Some have been more impressive than others. Jaimie Alexander as Asgardian warrior Lady Sif was an exciting addition to the team in Yes Men but still left fans wondering when one of the Avengers would make an appearance.

Now with Nick Fury showing up in a clear cross-over between Captain America: The Winter Soldier and Agents of S.H.I.E.L.D. this is quite probably the best season tie in, ever. The shows maker were very sneaky in the way that they did it. In fact, when the scene with Fury appears, the first thought is that this furious car chase is another trailer for the Marvel sequel. Once it becomes apparent that this is part of the show, excitement levels raise accordingly. Next week’s show, Turn, Turn, Turn should pump up that adrenalin even further.

2 Responses to "Agents of SHIELD: Captain America Best Season Tie in Ever"