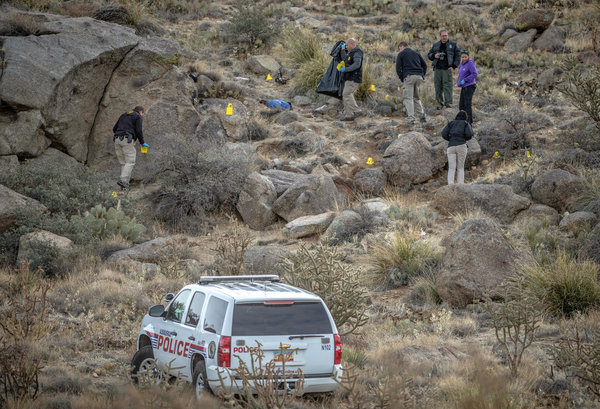 Albuquerque is in an uproar over the unchecked violence hitting the most populated city in New Mexico. Murders, raids, protests, and fear has rocked the 32nd largest city in the nation. Yet the criminals in these cases are not the typical felons, but Albuquerque’s own police force who have run themselves in a manner of judges, juries, and executioners of its citizens.

Over the last two years the city has seen over three dozen police involved shootings in the city in which more than 20 of those ended in death. The citizens of Albuquerque have been so shaken by the latest deaths that it has sparked massive protests in the heart of the city. Protests that led to disturbing clashes between authorities and citizens with riot squads sending tear gas into the crowds. These protests came to a head after a video ended up online of a homeless man, James M. Boyd, who was brutally shot on March 16 by several heavily armed officers. Boyd’s devastating crime was camping in a remote area outside of town. In a disturbing twist, the police taped the entire incident giving complete details of what transpired. To be clear, the video was not released by the department nor any city officials, but released by the cyber-hacking group Anonymous.

On March 30 the computer systems of the police department and the City of Albuquerque were hacked and video footage released online allowed the public to view several videos that show the crimes in action. The video was so clearly disturbing that many citizens were shocked that the police even kept the video. The video completely countered the police argument that Boyd was trying to attack officers with knives. In the video Boyd expressed his fears that the police force was going to hurt him and he promised to come with them peacefully if they assured him they would keep him safe. Shortly after he gathered his backpack and gear, ready to walk with the officers as a K-9 officer went after Boyd who then grabbed his knife to protect himself. The dog was called back and Boyd was instructed to drop the knife, as he turned his back to the officers to drop the knife behind him, several shots were fired into his back causing Boyd to fall face first into the ground. The video shows Boyd clearly unable to move, possibly due to being partially paralyzed, yet he yelled out to officers again begging them to not hurt him any more. Officers screamed for him to drop his knife and Boyd yelled back that he could not, and expressed that he could not move. As he lay on the ground, with several high-powered shot-gun wounds to his body, a single officer continued to send multiple shots into his back as he lay on the ground dying. After there was no more movement from Boyd the officers then proceeded to send the K-9 dog after the obviously deceased Boyd whose body was then forced into handcuffs by officers.

In the case of James Boyd, the Albuquerque police acted as judge, jury and executioner for his horrendous crime of being homeless. Police had argued, and the police chief backed up his officers, that the police were fully vindicated in the killing of Boyd after he tried to attack police. Luckily these cyber super heroes were there to break open the case so that James Boyd’s memory was not tarnished any further.

The Albuquerque police department seems so out of control that the Mayor sent an urgent letter to the Department of Justice for help in investigating the police brutality ravaging the city. As Police Chief Gordon Eden supported the Mayor’s efforts to involve the DOJ, the Mayor expressed he still had faith in the men and women of the force and the abilities of Chief Eden. However positive city officials seem with each other in public, the FBI is investigating Boyd’s sad and utterly preventable death. City officials seem to believe that the only need for change is how the department deals with mentally disturbed individuals. Yet the only indication that Boyd was mentally ill came from the Albuquerque police officials who have lost the trust of its citizens. Most of the 32 other officer involved shootings did not involve mentally disturbed individuals who were so out of control that only shooting them would control the situation.

The video shows that at no time was there an issue with any mental instability of Boyd’s actions. One would be irresponsible in reporting to not include that Boyd did have a previous record, however police did not give the man a chance to come peacefully. They reacted first, shooting the man to death.

As the American Civil Liberties Union of New Mexico expressed an appreciation for the call to action, it simply is not enough for the people of New Mexico nor the people of the US. An outrage has spread from coast to coast in a call for these officers to face charges for breaking their code to protect its citizens. As changes are obviously needed within the department itself, very few officials are calling for these officers to pay for their crime. As police all over the country skillfully uphold the honor of the badge, officers who fail its citizens should never get a free pass for such obvious failures. Situations such as these put all officers at risk nation wide. If citizens stand in fear of their officials more gun violence against police will follow. Holding these officers to claim responsibility for their actions will promote a better respect for police. We owe it to honorable officers everywhere to hold the police responsible for their actions. The Albuquerque police have no right to act as judge, jury, and executioners of its citizens. Its citizens owe it to police forces everywhere to punish those who abuse their power in order to repair a severely shattered balance of trust.

One Response to "Albuquerque Police: Judge, Jury and Executioner (Video)"