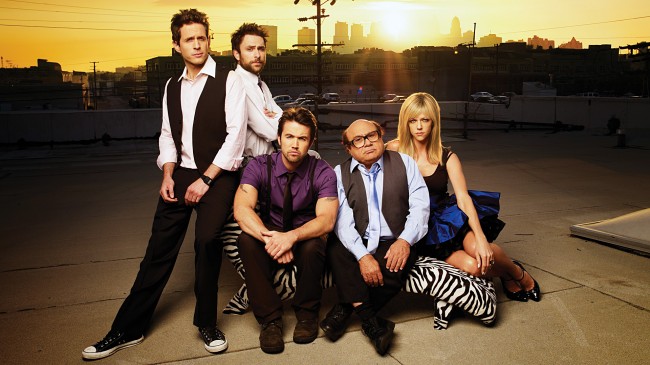 In not so surprising news, It’s Always Sunny in Philadelphia, the hilarious low budget comedy series from FX Productions, has been renewed for two more seasons on FXX. It seems like just yesterday that the gang appeared on TV screens for the first time. Initially, it was not so clear what the show’s message was – in fact, it is still unclear to some. But the show’s popularity shows that viewers do not seem to care about the lack of a clear message, a concept first seen and popularized by the show Seinfeld. Well, this show has taken that concept to new lows, and it is hysterically funny. Imagine Cheers on acid and the rest seems to write itself – although, there is no questioning the talent that has made Always Sunny a success.

Beginning in 2005, the triple-threat team of Rob McElhenney (creator/producer), Glenn Howerton (producer), and Charlie Day (producer) created a magical landscape of depraved and perverted bar life at the fictitious Paddy’s Pub in South Philadelphia. Although anyone who has spent time in South Philadelphia may not see the locale as so fictitious.  The trio of producers who also star in the series are joined by entertainment legend Danny DeVito and Kaitlin Olson, who had become known for her previous work on Curb Your Enthusiasm as Larry David’s intolerant sister-in-law.

As part of a three-year deal, FX Productions is renewing ‘Always Sunny’ for two more seasons. Seasons 11 and 12 will take audiences through 2017 and will continue to air on the slightly male-oriented channel FXX. Always Sunny originally aired on FX, but was moved to the sister station in 2013. Furthermore, fans of the saga can catch rerun marathons on Comedy Central. This new deal will make Always Sunny the longest running live-action comedy on cable, covering about 12 years in all.

According to Nick Grad, a president of FX Original Programming, Rob, Charlie and Glenn are “… three of the most talented comedy writers and producers in our business, not to mention very gifted actors.” Part of the deal inked between FX and RCG (Rob, Charlie, Glenn) productions, is the addition of a new Tracy Morgan series to be helmed by the trifecta of comedic geniuses. Although the show is currently untitled, it is set to include 10 episodes and replace Morgan’s failed FX pilot Do or Die. Moreover, the group has been tasked with creating and producing even more upcoming show concepts.

It’s Always Sunny in Philadelphia won a People’s Choice Award in 2012 for Favorite Cable TV Comedy and has had nominations in a variety of categories over the years on a least seven different occasions. It is no wonder FX, which falls under the Fox Entertainment Group umbrella, has decided to renew Always Sunny for at least two more seasons.  Eric Schrier, also a president of FX Original Programming added “We’ve had a wonderful partnership with Rob, Charlie and Glenn and over the past ten years… They are fantastic and prolific producers, writers and actors…” With this “monster” deal recently forged between FX and RCG, fans of their brand of humor have a lot to look forward to.