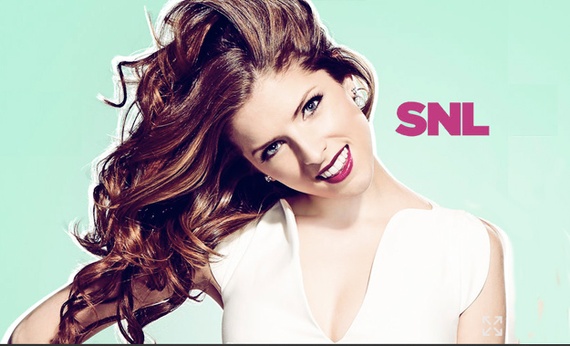 Anna Kendrick may call herself pale, awkward and very, very small on her twitter handle, but this week as a host on Saturday Night Live she was hilarious and not awkward at all as she spoofed pop stars. Kendrick hosted Saturday Night Live with Pharrell Williams as the musical guest. Williams preformed Happy and Marilyn Moore. Kendrick started the night by singing in her opening monologue and continued to sing throughout the night in other skits.

Kendrick spent the night as host singing, dancing, and acting in some great sketches with the regular cast. Fans are aware that Kendrick can sing from her movie Pitch Perfect, but Kendrick also showcased her rapping abilities in a musical sketch about dongs. The words of the song describe each dong as being like a snowflake and nasty girls should travel all over the world to search for them. The night did receive some mixed reviews, as some people commented that Kendrick wasn’t very funny in her skits, but praised Pharrell for the one sketch he appeared in.

During her Saturday Night Live appearance, Anna Kendrick also spoofed pop stars, and pop music in general, in a skit from The Little Mermaid. Kendrick played Ariel in the scene when Ariel strikes a deal with the evil sea monster Ursula. Ariel wants to trade in her beautiful voice for a pair of human legs, so she can be together with Prince Eric. In the Saturday Night Live skit, Kendrick doesn’t sing in Ariel’s beautiful voice, she instead sings like other pop stars, such as Kesha, Brittany Spears, and Selena Gomez. Each time Kendrick sings, her voice sounds auto tuned and very nasal. When Ursula tells her that her voice sounds terrible, Kendrick says that this is how all the humans are singing now. The skit ends with Ursula taking her friend, the crab, Sebastian’s voice instead of Ariel’s.

Anna Kendrick was born in Portland, Maine. At age 10, Kendrick regularly took the bus to New York City so she could go to auditions. Kendrick started her career on Broadway in 1998, in the musical High Society. She was nominated for a Tony Award for her role as Dinah Lord. Kendrick also received recognition for her role in Up in the Air in 2009, where she received an Academy Award, Golden Globe, BAFTA, and a Screen Actors Guild Award nomination for best supporting actress. Kendrick also appeared in the Twilight movies, as Bella’s friend from school, Jessica Stanley.

Anna Kendrick’s appearance on Saturday Night Live and her ability to hilariously spoof pop stars only adds to Kendrick’s appeal with fans. Unlike certain pop stars, which have to be auto tuned and spoon fed lines, Kendrick is a true triple threat. She can sing, dance, and act. More than that, she is witty, smart, and down to earth. Kendrick’s theater singing experience gives her a professional edge, however, her personality and the ability to rap and make fun of how pop stars sing today, is what makes her fun to watch.