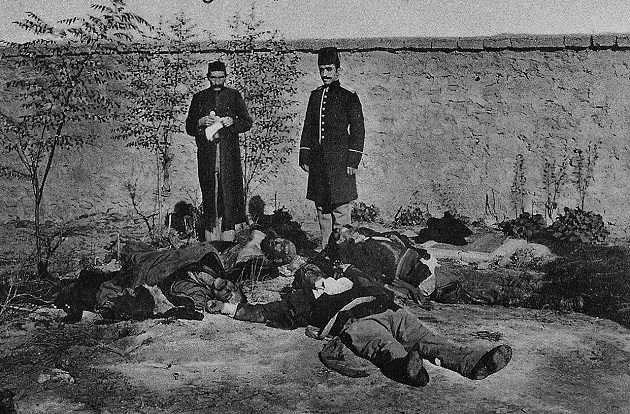 Monday, March 31, Azerbaijan commemorated March Days, several brutal days in 1918 filled with fighting, in which villages were burned and an estimated 3,000-20,000 Azerbaijanis killed. March 31 commemorates a date when Armenians, under the Bolshevik justification of fighting counter-terrorism following the 1917 Revolution in Russia and under the banner of a “Great Armenia,” seized power in Baku, the capital of Azerbaijan.

The massacre began the night of March 30. Besides Baku, Armenians killed thousands in the villages of Shamakhy, Guba, Lenkeran, Mughan and Nagorno-Karabakh. Muslim shrines, Mosques, cultural landmarks, schools, hospitals and other buildings were burned and destroyed.

The narrative remembered by Azerbaijanis commemorating March Days begins with the short-lived treaty between Azerbaijan, Armenia and Georgia, which broke up following the collapse of the Russian Empire during the First World War in May of 1918, when Azerbaijan declared independence and became, for 23 months, the Azerbaijan Democratic Republic (ADR), the Muslim world’s first parliamentary republic.

During this time, the parliament was responsible for a number of other firsts in the Muslim world, including the extension of suffrage to women and the establishment of the first modern-type university in the region. The ADR Council of Ministers decreed on July 15, 1918 the establishment of an extraordinary committee to investigate the massacre and notify the community about the truth. March 31 was set as a date for national grief and sorrow. The commemoration was again held in 1920.

In April of 1920, the Bolshevik Red Army invaded the ADR and established the Azerbaijan SSR and Soviet policy forgot the massacre. The commemoration was not observed again until 1998, seven years after glasnost led to the breakup of the Soviet Union and Azerbaijan’s Supreme Council adopted a declaration of independence, which the nation affirmed through a referendum at the end of 1991.

In 1998 President Heydar Aliyev announced the reinstatement of the March 31 commemoration.

In 1918 Baku was Transcaucasia’s largest city. Yearly, Baku produced 7 million tons of oil—15 percent of global oil production.  When the Bolsheviks lost Chechnya’s Grozny oilfields in 1917, Baku became the sole source of oil for the Bolsheviks. Lenin is recorded as stating that “Soviet Russia cannot survive without Baku oil.”

Within Baku, several overlapping groups vied for power. Baku had 74,000 temporary migrants from all over Russia, 56,000 Azerbaijanis, 25,000 Armenians, and thousands of people of other nationalities. Three main political groups vied for control of the city. Two nationalist groups, the Azerbaijani Musavat and the Armenian Revolutionary Federation (ARF)—both members of Sejm, or the Transcaucasian Commissariat, a special committee formed by Armenian, Azerbaijani and Georgian representatives following the February Revolution. The third group was the Baku Soviet, formed to prevent Sejm separation from the Soviet. The Baku Soviet, which included Azerbaijanis and Armenians, was not recognized by either the Musavat or the ARF.

On March 27, a group of Azerbaijani soldiers were disarmed by the Soviet. The Azerbaijanis resisted. A firefight resulted, and several people were killed before the Azerbaijani were disarmed. (An alternative narrative has a crew of officials investigating the Azerbaijani group and being driven back by gunfire.) By March 30, Baku was the scene of civil war. The Baku Soviet was not strong enough to put down the Azerbaijani masses and so enlisted several groups, including Armenians, who had initially remained neutral to the conflict–which gave the conflict an ethnic character. In the conflict, violence between the historical rivals was indiscriminate on both sides. Eventually, the Bolsheviks decided to employ artillery, which besieged the Azerbaijanis until they agreed to sign a ceasefire April 1. Fighting continued until the night of April 2, when thousands of Azerbaijanis left Baku en masse.