Chicago Cubs Looking to the Future for Relief: IvyLine 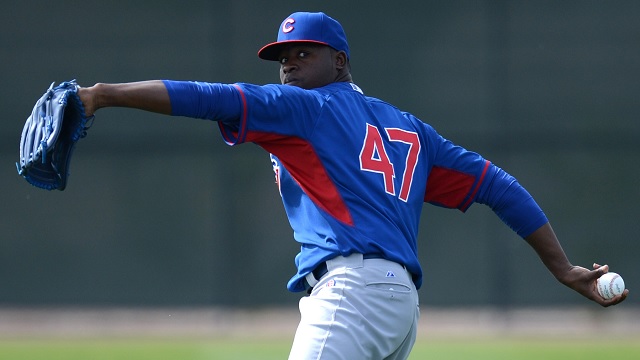 With late inning leads being forfeited on an almost daily basis, the Chicago Cubs are in desperate need of some bullpen help. Surprisingly, there is actually a late inning specialist with big league experience in the Cubs’ farm system, and he routinely throws in the upper 90s on the radar gun. Like everything else with the Lovable Losers these days, however, the club is preaching patience with the young pitcher.

The reliever’s name is Arodys Vizcaino, and the Cubs acquired him from the Atlanta Braves through a trade back in 2012. The reason that the 23-year-old right-hander has not been called up to help steady one of the shakiest bullpens in the Major Leagues is because he has not pitched since 2011 entering this season. Vizcaino blew out his elbow while pitching for the Braves in that year and needed Tommy John surgery.The injury shook Atlanta’s confidence in the reliever quickly, as he only made 17 appearances for the Braves before heading to the disabled list. Following an exhaustive rehabilitation, Vizcaino was set to break in with the Cubs’ organization last year, but suffered another setback and needed arthroscopic surgery on the same elbow on which the Tommy John surgery was performed. This caused the reliever to miss the entire 2013 season.

Fast forward to 2014. The 6-foot, 250-pound reliever from the Dominican made a strong showing in spring training with the big league club this March, and he was designated to the club’s high single-A minor league team in Daytona. This assignment was more the result of location, rather than a judgment on Vizcaino’s abilities. Cubs’ management wanted to put the Dominican pitcher in a climate that is warm and conducive to rehabilitation. In this regard, Daytona was the perfect fit, especially when the other alternatives are Tennessee and Iowa.

So far this season Vizcaino has made five appearances for the Daytona Cubs. In five innings of work he has given up one earned run and boasts a 1.80 E.R.A. He also has struck out six hitters while walking just two and has given up a total of four hits. Daytona Cubs pitching coach Ron Villone says that the reliever has “special stuff.” Villone, a former hurler himself, spent 15 years in the big leagues as a reliever and knows talent at the position when he sees it. He says that Vizcaino’s consistently high velocity is a gift that few pitchers have.

The 23-year-old fireballer, who has hit 98 miles per hour on the radar gun a few times this season, is working in Daytona to get his routine down and build up his arm strength to the point that he could once again pitch on back-to-back nights. Right now he is pitching on two days rest, and the next step this spring will be to go out on a single day of rest. Villone says that Vizcaino also has some control issues to work out, but with a two-year lay-off, that is to be expected.

“Not playing in games for a couple of years has been tough for [Vizcaino],” he said. “He’s worked hard to get here, and now we really want to fine-tune that with all the little things he’s doing to get his good habits back.”

The right-handed reliever knows that it will be a bit of a long road to make it to Chicago, but he is just happy to be throwing the ball and feeling good. He is focused on getting his mechanics down and doing everything the correct way. He says that he wants to be an example to his teammates to show them what it takes to make it to the big leagues. If all goes well in Daytona and eventually Iowa, look for Vizcaino to be debuting at Wrigley Field some time this summer. For Cubs’ fans he cannot get to Chicago soon enough.