Daddy Longlegs With Four Eyes Once Walked the Earth 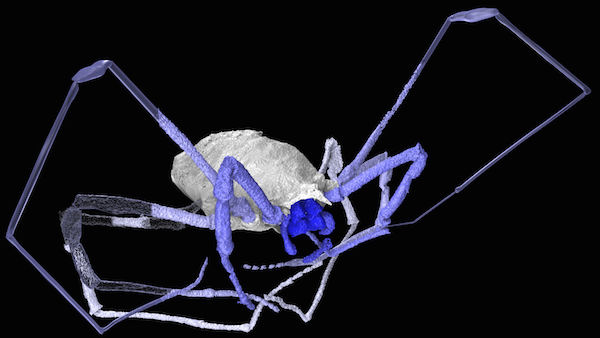 Ancient daddy longlegs, or harvestmen “spiders,” had two extra eyes compared to the ones of today. Their extra pair of eyes were located on the sides of their bodies, according to a new study out by researchers the University of Manchester and the American Museum of Natural History that’s been published in the online journal Current Biology, which you can read in it entirety at the last link below.

The researchers made their discovery when the studied a rare three dimensional fossil of an ancient daddy long legs. They used a high-resolution x-ray imaging machine in London, at the Natural History Museum there.

Harvestmen have eight legs like spiders, and they’re arachnids, like spiders, but they are technically not spiders. Daddy long legs are related more closely to scorpions than to spiders, despite their spidery appearance.

In their embryo stage, the daddy long legs exhibit a gene to grow a second pair of eyes like they once had. However, this gene is expressed for only a shot while in their early development, and when the Harvest men hatch, they only have one pair of eyes.

By studying the scant fossil evidence, scientists have known that other ancient arachnids had extra pairs of eyes. However, paleontologists had not known that the same was true of daddy long legs, until they closely examined the rare fossil of one.

Every continent except for Antarctica is the home to at least one species of daddy longlegs. The group of arachnids that the daddy longlegs belong to is the Opiliones. This same group also includes mites and ticks.

Besides “harvestmen,” daddy longlegs go by other names, such as harvest spiders and shepherd spiders, though they are not spiders, but are in the order Opiliones. Daddy long legs have more oval or round bodies than spiders, and they lack a waist. Unlike spiders, their abdomens and cephalothorax are joined together. Also, unlike spiders, daddy longlegs have stink glands.

The reason that there aren’t many fossil records of spiders or daddy longlegs is that their exoskeletons are relatively fragile and, generally speaking, don’t preserve very well in fossil form.

The daddy longlegs fossil with the extra pair of eyes that was studied and mentioned in the recent study was discovered in eastern France. It is 305 million years old. Russell Garwood is the lead author of the study, and he is a paleontologist at the University of Manchester in the United Kingdom. The fossilized species of daddy longlegs that was found is called Hastocularis argus. This species was not known until recently.

According to Garwood, the fossil is unique in that it depicts a daddy longlegs or Hastocularis argus “preserved in three dimensions.” That enabled the researchers to examine the details of the structure of the daddy longleg’s eyes more closely than scientists have been able to do in the past.

If you find that modern-day daddy longlegs, or harvestmen, are creepy, imagine what one with four eyes would have looked like. Though it’s currently unknown why daddy longlegs no longer have an extra pair of lateral eyes, theories have arisen, like that they were perhaps simply unnecessary, as they were quite good hunters of prey — which includes spiders — with just one pair of eyes.