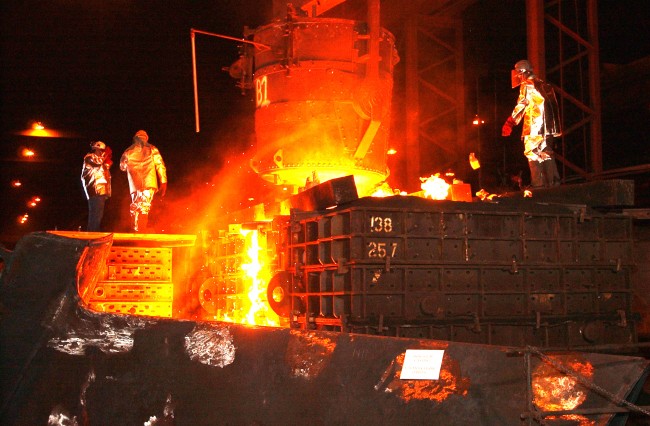 The announcement in February of the establishment, outside Detroit in nearby Canton Township, of the American Lightweight Materials Manufacturing Innovation Institute, a $148 million hub, was one sign that with lots of finance and goodwill, Detroit has a bright future. After decades of decline and failed improvements, Detroit now pushes forward as an innovation hub, and models its green future on that of Philadelphia, which has demonstrated the potential for success of green urban design in formerly blighted areas. A greener Detroit is what many imagine, with more money of course, and abandoned neighborhoods becoming parks, urban gardens and bicycle and recreation-friendly linkages.

Michigan Governor Rick Snyder described the economic situation optimistically, suggesting that the state is perfectly positioned to push forward new technologies and materials, that will dramatically impact the transportation industry in the future. He lauded the collaborative effort with industry, universities, and a host of local, regional and federal partners, that will bring investment and some 10,000 jobs to the upper Midwest. The announcement of the Detroit hub occurred alongside that for Chicago’s new digital design and manufacturing hub, and follows earlier national innovation hubs established in Raleigh, NC and Youngstown, OH.

As Detroit pushes forward with its innovation hub and its green potential, the American Lightweight Materials Manufacturing Innovation Institute’s principal partners will be the University of Michigan, EWI, a nonprofit focused on manufacturing technology, and Ohio State University. Michigan hopes to regain its earlier reputation for manufacturing and engineering prowess. EWI leads a consortium of 60 universities and countless businesses and organizations. Major business investment comes from significant players in manufacturing with aluminum, titanium, and high-strength steel.

With innovative science and forward-thinking leadership, the hub will expand markets for lightweight metals and alloys for automobile, aircraft and other industries. Jeff Mason, executive director of the University Research Corridor, suggests these innovations will be crucial to meeting federal fuel economy standards. Mason suggests that central steps are redesigning  vehicle powertrains and removing extra weight. Earlier research at University of Michigan, includes a $12.3 million grant over five years from the Materials Genome Initiative intended to shorten the time, sometimes 10-20 years, required to bring new materials to the market.

With another sign of the shifting attitudes towards the automobile, the Uber app for iPhone and Android has come to Detroit, which can connect a pedestrian with a driver and car at the touch of a button. It resembles Airbnb in that the service enables those searching, in Airbnb’s case for a room, house or apartment for vacation, to connect easily with a very local economy. The app allows the potential passenger to set a pickup location and then confirm all details, and pay including tips though the Uber account.

The demolitions, sometimes 450 per week, that Detroit has undertaken across 20 square miles of partially vacant houses, are part of the plan to come out of bankruptcy.  These areas show great potential, as Detroit pushes forward as an innovation hub, to introduce new post-industrial urban greening projects.  Urban farms, parks and public space are the ideal, like Brightmoor’s Lyndon Greenway, which already links two significant parks with smaller ones and connections to bike paths. Though Detroit has more vacant land than any other American city, green urban design programs have had significant results in Philadelphia and Cleveland.

When Joe Kvoriak, a professor in the Wayne State University Theater and Dance Department, and his wife, were looking for a house in the city, the nonprofit Grandmont Rosedale Development Corp. (GRDC) was able to assist through its Community Stabilization Program. The Ford and Kresge Foundations have made significant investment toward stabilizing neighborhoods. In traditional Detroit neighborhoods with lots of resident owners, a mix of updating perhaps declining historic structures and demolishing strategically, has contributed to stable neighborhoods with a mix of income levels. The Grandmont-Rosedale area has become a notable success in the national search for best practices in post-industrial development. In 2013 the Kresge Foundation renewed for two more years its commitment to facilitate GRDC’s project to buy vacant houses, update them and put them back on the market. In Grandmont-Rosedale their success is indicated by rising property values and a rate of 82 percent resident ownership, compared with 52.6 percent citywide.

In Philadelphia, the Pennsylvania Horticultural Society and its Philly Green program have had significant success and drawn national attention, including from Detroit. Philly Green has converted 10,000 vacant lots in the last twenty years. According to Joe Schilling, director of the Metropolitan Institute at Virginia Tech, this is the “gold standard,” and makes it the model for GRDC’s programs.  A green future for Detroit has great potential to help push forward with the new vision for the city as innovation hub. The buy-in required from public and private sources would be significant, but again Philadelphia is a good precedent, where a $250 million bond issue included $12 million towards green investment.