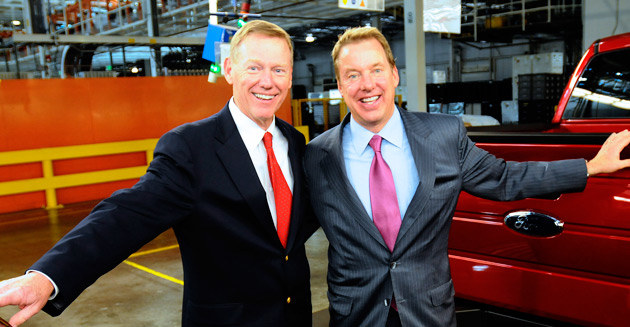 Ford CEO Alan Mulally, 68, widely considered one of the smartest business leaders in the United States, will step down from his leadership post before the end of the year, according to unnamed sources. Mulally’s handpicked successor, 53-year-old chief operating officer Mark Fields, has worked side-by-side with Mulally since 2006, when Mulally was hired away from Boeing where he was the President and Chief Executive Officer of Boeing’s Commercial Aviation Division. Everything seems in place for Fields to take over toward the end of the year, but transitions are never easy at Ford.

Among business scholars, Mulally has a reputation for being a real magician. Although he was never rewarded with the top spot at Boeing, he was instrumental in the development of Boeing’s key products. He worked on every airframe the company has produced since 1969, when he was hired directly out of college with a Master of Science Degree in aeronautical and astrological engineering from the University of Kansas. He also holds a Master degree in Management from the Sloan Institute at the Massachusetts Institute of Technology.

Widely credited for pulling Boeing out of its doldrums to beat primary competitor Airbus at their own game – wide body aircraft – in the early 2000’s, Mulally is also known for his political acumen and social smarts, an engineer with good and perhaps even great social skills. With the instincts of psychotherapists coupled with the insights of a seasoned technical manager, he was a natural match to replace William Clay Ford II, the great-grandson of company founder Henry Ford, and the first Ford to run the company since uncle Henry Ford II stepped down in 1979.

Even though Mulally had a well-deserved reputation as a fixer, there was consternation in the business press when Ford appointed a non-car guy to run their company. Mulally was only offered the position after Ford was turned down by DiamlerChrysler CEO Dieter Zetsche, better known as Dr. Z from Chrysler’s 2006 ad campaign, and by Carlos Ghosn of Renault/Nissan.

Neither man wanted to take on “the Ford Challenge,” a company with an aging product line tarnished with a history of bland styling, mechanical issues, a distinctly later middle-aged target population, and an ugly-looking balance sheet. Mulally had already been passed over twice for the top spot as CEO of the parent Boeing Company, in 2003 and again in 2005. After a 37 year career at Boeing, with no more upward mobility there, Mulally was ready for a change…and so was Ford.

Bill Ford was by no means done with Ford in 2006, but he was done with holding down the fort as President, Chief Executive Officer and Chief Operating Officer, which were simply too many hats for one man to wear. A visionary leader, with wide-ranging interests beyond the automobile industry, Ford needed a CEO who could be a real working partner committed to achieving higher mileage and alternative-fuel vehicle goals that Bill Ford had set for the company in 2000. After an acrimonious 2001 ouster of his predecessor, Jacques Nassar, who focused on maximizing profits and shareholder value through foreign investments, Bill Ford was looking for someone who shared his people-first and tradition-matters orientation.

Mulally fit the bill. He brought with him the inspirational, people-centric approach to management he learned while working under former Boeing CEO Phil Condit. Condit’s “working together” philosophy focused on developing a more collegial environment through the use of a collective approach to the identification and resolution of problems. Mulally expanded that concept to include a holistic element, looking at the emotional lives of his co-workers as part of the solution, creating a more humane working environment.

Mulally had to hit the ground running, however, because Ford was deeply in debt and, in 2006, was already feeling the effects of the economic slowdown that would not become obvious for another two years. There is some speculation that, because Ford has traditionally catered to lower-income buyers, they were the first automaker to feel the unraveling of the economy.

In order to stave off bankruptcy, Mulally engineered a $23 billion loan, betting all of the company’s physical assets as collateral in a “bet the farm” move to raise money, restructure debt, fund physical renovations, and underwrite the retooling and redesigning of the company’s core products. When the economic tsunami hit the auto industry in 2008, Mulally was one of the three automotive CEOs who made the mistake of flying to Washington in three separate company jets to address a Congressional committee considering the auto industry bail-out plan. However, there was a significant difference between the three firms. While General Motors and Chrysler were there to beg for help, Mulally was not. That $23 billion loan left Ford sitting on a bundle of cash, enabling it to ride out the storm without government help, making Ford the only American car company never to seek or receive a government bailout.

In a subsequent appearance before a congressional committee, Mulally made the journey in a Ford hybrid, having sold off all but one of the company’s jets. More importantly, however, Mulally – as the representative of the only company present that was not looking for a handout – spoke to the necessity for salvaging all three automakers. His key point that, if one of the Big Three were to go under, there would not be enough business to keep the thousands of subcontractors afloat. Without those subcontractors, the two remaining car companies would not have the equipment, parts and supplies they would need to keep running. If the subcontractors were forced out of business, the other two car companies would also fail.  Mulally’s comments were widely-credited for swaying Congress to favor the bailout.

Mulally may not have been a car guy, but he learned quickly He revived the venerable Taurus label from the company archives, in a so-far futile attempt to restore some luster to the Taurus badge. He also sold off Jaguar and Land Rover to India’s Tata Motors for $2.3 billion, taking a considerable loss on the brands that former CEO Jacques Nasser bet on heavily as part of his international diversification strategy, distracting Ford from its core products. When the market plunged in 2008, Tata Motors, stuck with high mileage low volume vehicles on its showroom floors, had to go to the British government for a handout. (Both product lines are manufactured in Great Britain.) Had Mulally waited two more years, he probably would not have been able to unload any of the troubled brands pulling down the company’s balance sheets.

The new CEO also unloaded Aston Martin to a private investment group, while holding onto a $67 million stake in the company, releasing Ford from having to carry the overhead while still being able to dip its beak into the profits. Volvo was kicked to the curb, where it was picked up by private investors. The divestments helped Ford to improve its fleet mileage numbers, and enabled the company to focus more resources on a more manageable product line, freeing up intellectual capacity to work on electric, hybrid and multi-fuel vehicles.

Mulally’s scorecard on the disinvestment program: Jaguar and Land Rover are doing well. Aston Martin is still alive and kicking. Volvo seems likely to go down the drain following Saab, the other Swedish car company, which went under after being divested from General Motors. Mulally, however, says he has no regrets about divesting Ford from its foreign entanglements, nor has that stopped him from making serious inroads in China, where Ford has replaced Toyota as the number three brand there.

Ford CEO Alan Mulally may be setting a retirement date for later this year, but that does not mean that he is going into retirement. Mulally has something of a guru complex. He loves identifying and developing talented people, and he loves fixing broken organizations, so he is in the market for a position in corporate governance or business policy making from which he can continue teaching and fix things.

Look for me on Twitter:@alanmilner