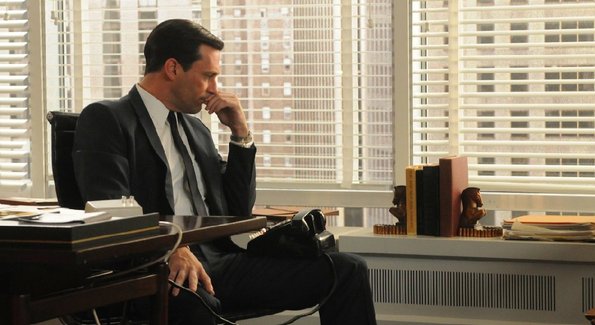 Fans of AMC’s hit drama, Mad Men, have long been speculating that the whole premise of the show is the self-destruction of Don Draper, and with many new foreboding clues in this past Sunday’s episode coming to light, there is a strong possibility that his demise is imminent. For seven years viewers have been tuning in to watch this amazing period piece probe the dark recesses of the human psyche. Along the way the series has made the point that money, success, and a good job are not truly enough to satisfy the longings of the human heart.

Don Draper has been on a mission his whole life to try and fill the void in his soul, mostly turning to alcohol, sex, and fulfillment in his career to accomplish the task. In reality, his attempts to medicate himself end up causing even more pain, increasing the size of the hole in his heart, not shrinking it. The Mad Men leading man has tried to hide his true identity, yet pieces of h self keep slipping through the cracks in the facade, and people are catching on. Now, in this season, Don is starting to man up and tell the truth, but will the consequences of his years of lying lead him to take his own life?

Many viewers think this is likely going to be the way that Mad Men will end its seven season run, with Don Draper meeting his demise at his own hand. There are several clues that have popped up so far this year that lends some credibility to this foreboding theory.  One such clue is that Don keeps telling the truth, as it seems to get harder and harder for him to hide who he is from the world around him. His outburst with Hershey, Sally catching him with his pants down, and his confession to the woman on the plane during the season opener, all points to a man who is simply exhausted from trying to keep all of his lies straight. The problem is that the hole he is in gets bigger each time he purges himself of deceit, leaving a trail of broken hearts, his own included.

Take Don’s relationship with Megan for example, which passed beyond the threshold of strained and might now be on the verge of implosion. On the latest episode of Mad Men, Don pays Megan a visit out in sunny California after getting a call from Alan Silver about his lovely lady’s behavior, which seems to indicate she is headed for some type of nervous breakdown. After the two lovebirds spend some “quality time” together, Don confronts Megan about her behavior. Through the course of the conversation, which includes Megan accusing him of having a mistress, Don is forced to fess up to the charade, telling Megan that he has not been working for over a year.

One would think that his attempt to be honest and transparent would come as a relief to his wife, especially now that she knows he is not putting the moves on other women, but it seems to only make her even angrier. She is flabbergasted that Don would not want to stay with her in Los Angeles while on his leave, and proceeds to tell him to take a hike, giving him the boot back to New York. He has now lost his job, the respect of his co-workers, and the adoration of his wife. Is it any wonder this poor guy has spent his free time guzzling bottles of alcohol in his bathrobe while watching TV?

Another foreboding clue from Mad Men writers that indicates the possible demise of Don Draper is his transformation from a man confident in his abilities, to someone who is desperately grasping at the shredded pieces of his career. This was evidenced by his eagerness to accept a new deal from his business associates at Sterling Cooper & Partners, who have decided it is cheaper to bring him back to work than continue paying his leave. No one is happy to see Don, and the office makes that clear to him. The offer being proposed comes with heavy regulations, such as not being alone with clients, not being allowed to drink during the day, answering to Lou, and taking Lane Pryce’s old office. These are things that Draper never would have agreed to in the past, yet he does so now without taking a day to think it over.

What will happen if Don is not able to abide by the rules? The chances of him playing by the book are pretty slim, but insubordination will cost him his job, career, and everything that goes with it, including his carefully crafted identity. Couple that with the destruction of his second marriage, and the subtle clues of his longing stares at the balcony outside his apartment, and it seems like a recipe for suicide. Not to mention he will now be hanging out in the office where one of his business associates hung himself, and the creepy intro which shows a man falling to his certain doom, which likely represents Don. As his life continues to unravel, will it lead him to salvation or to a future in a pine box? One thing is for sure, the foreboding clues that Mad Men writers have dropped indicate that Don Draper is headed for his untimely demise. Whether that is literal, as in the death of the character, or metaphorical, as in the death of Draper but the birth of Dick Whitman, is unclear.

One Response to "Foreboding Clues in ‘Mad Men’ Point to Don Draper’s Demise?"