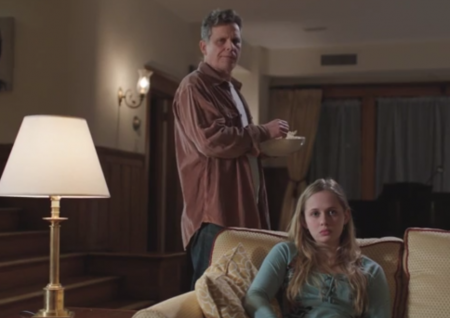 HBO have released a bunch of commercials that are relying upon an outdated parent/teen stereotype to publicize their new HBO GO service. In the series of advertisements, we see a “typical” American family, either consisting of Mom, Dad, teen son and daughter watching either “uncomfortable” sex filled scenes or non sex scenes where the parents, who obviously do not have a pop cultural bone in their body, interrupt the show on television by guessing the actors incorrectly.

Does HBO believe that such a chasm between parents and their teenage children still exists. A sort of flash-back to the 1950s. Certainly up to a certain age kids are still horrified by the thought that their folks do the “dirty” after dark, or when they’re not around. Although nowadays it would be a mighty sheltered teen, i.e., of the age portrayed in the commercials, who would feel that uncomfortable if parent and offspring were watching a television show that suddenly erupted into a sex scene.

Although to be fair, the amount of times that Lena Dunham gets caught without her clothes is uncomfortable for most everyone. Admittedly the one scene shown on the HBO commercial shows an incident where the actress is about to be accosted from the rear. In the advert, the teen girl appears completely at ease with the scene until the parent, in the guise of “good old dad” holding a bowl of popcorn leans over and, patting her on the shoulder, responds to Dunham’s line of “that doesn’t feel good,” with an inappropriate phrase of empowerment. This outdated stereotype may say more about Lena Dunham’s nudity and sex act on screen than the parent child interaction.

Again, the above example reeks of a 1950s/1960s Leave it to Beaver sort of parent, or more recently The Wonder Years where parents really do not understand their teenage daughter, or in the case of Beaver, Mr. and Mrs. Cleaver apparently do not engage in the old rumpy pumpy and if they do, it is nigh-on impossible to picture, not that you’d want to.

On top of the reliance of age-old and outdated stereotypes, do teenagers and their parents still watch television together nowadays? Certainly the quality of television on offer on just HBO alone, would make it understandable if entire families watched some of the great shows available for viewing this year alone. However funny these HBO commercials may be, but not that funny as stereotypical humor is never really gut-bustingly hilarious, they are nonetheless outdated. While HBO thinks these old-fashioned adverts are funny enough to sell their “GO” product, they’d probably hit the nail more squarely on the head by targeting shift workers or single parents. Sure these might not be as funny, but at least they’d be more realistic. Just a thought.