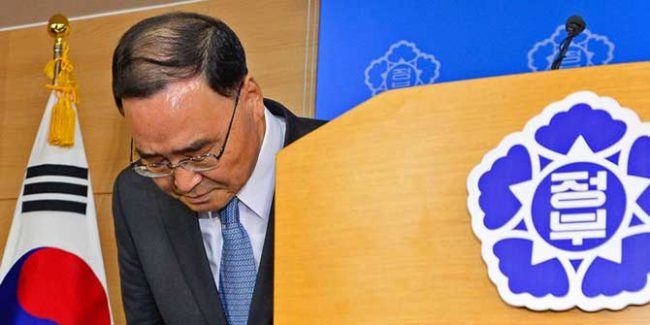 After being the subject of much criticism, Chung Hong-won has offered to resign as South Korea’s Prime Minister. The Prime Minister believes that this is the most appropriate way to take responsibility for the South Korean government’s response to a riparian disaster that left more than 300 individuals of varying age groups dead or missing on April 16 of this year. The ferry disaster off the coast of South Korea has only added to the mounting political tension in Eastern Asia.

The captain of this ferry did not go down with his ship; he, like 11 others of the 29 person crew, have been arrested on suspicion of abandoning ferry passengers who may have been in need of help as the ship was being swallowed by the cold sea. Park Geun-hye, South Korea’s President, has said that the actions taken by the neglectful crew are “tantamount to murder.” The South Korean President accepted the resignation of Mr. Chung, with the request that he hold his post until the ferry rescue efforts have been completed.

In the wake of the ferry-related political disaster, North Korea has made an announcement that the country intends to attempt another nuclear test; its fourth. United States President, Barack Obama responded by threatening North Korea with yet more sanctions against it. Totalitarian North Korea, the most isolated country in the world, periodically makes threats to absorb South Korea, which would reunite the two under a frightening regime. President Obama has said plainly that, “We will not hesitate to use our military might to defend our allies.” The statement may allude to a reprise of the Korean War if leader Kim Jong-un persists with his opportunistic conduct toward South Korea. The North Korean leader responded to the U.S. President’s declaration by encouraging his armies to, “Win one victory after another in the confrontation with the U.S.”

The tension between North and South Korea is generations old. The Korean war of the 1950s was never settled and the countries remain anxiously divided by what appear to be insurmountable differences. Nevertheless, North Korea has expressed its condolences to South Korea in light of the recent tragedy, the cause of which is still somewhat unclear. Kim Woo-Sook, a professor at the National Maritime University in Dongsam-dong, Yeongdo-gu, Busan, may have a plausible theory; he believes that the trouble may have been caused by a steering malfunction. The third-mate of the South Korean ferry, who had been steering at the time of the disaster, was a former student of Professor Kim. She spoke to him candidly at the Mokpo detention facility where she is being held in connection with the accident.

The crew member told her former professor that a 5-degree turn that she ordered was in congruence with the ship’s course, but somehow turned too far for the helmsman to correct and the ship began to list. Professor Kim Woo-Sook believes that a freight load below the ship’s deck had not been packed securely, causing the materials to shift to one side with the turn, and leaving the ship unbalanced. The professor believes that these two factors together caused the political and humanitarian disaster, and that the Korean ferry likely would not have capsized if the cargo had been loaded properly.