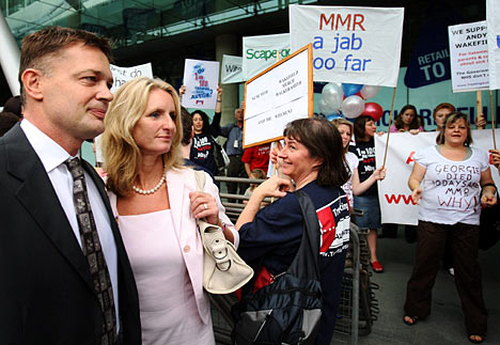 Recent outbreaks of measles in North America could be blamed on the anti-vaccine movement. Movement could be causing significant harm.

The first measles vaccine was invented in 1963 and saved thousands of lives. The movement against vaccines started in 1998 when a British doctor wrote that autism could have been due to a vaccine that vaccinates against measles, mumps and rubella in  a medical journal called The Lancet. He was not right.

When the article was thoroughly investigated, the research was found to have been done unethically and was filled with conflicts of interest. The data was false in the article.  The risks to health care were false. In 2010, The Lancet had to say that the report was totally incorrect. This is considered an uncommon step in academic journals.

Even though the research was false, it was believed by some people in the United Kingdom (UK) and the United States (US). The rates of vaccination have greatly decreased in the UK and the number of measles greatly increased. In the US, in 2013, measles cases tripled. There have been outbreaks of measles in eight US communities. 12 people were recently struck by measles in New York City.

In Canada, in recent weeks, provinces from British Columbia to Ontario have received reports of measles outbreaks. Edmonton, Manitoba and Calgary have just confirmed some new cases. Canadian health officials and doctors are putting the blame on anti-vaccination movement on the recent outbreaks of measles.

Doctors and health officials are pointing the blame at the anti-vaccination movement for the sudden outbreak, which is also spreading throughout the United States. A Canadian doctor named Dr. Gerald Evans, a professor at Queen’s University, says that low vaccine rates have indeed gone down. The outbreaks are the result of vaccination rates falling. Some people are simply not getting vaccinated.

Th anti-vaccination movement that the doctors blame for measles outbreaks in North America got a big boost in 2007 when celebrities like Jenny McCarthy joined the movement. These celebrities went on numerous TV shows and printed many books that told parents not to vaccinate their children. These celebrities believe that autism has increased owing to vaccinations, even though the original report in UK’s The Lancet that stated this has been proven to be untrue.

The anti-vaccination movement thinks that it is a chemical called thimerosal is to blame for the increase of autistic children. This chemical has stopped being employed in the measles, rubella and mumps vaccine in 1999. It was used as a preservative in vaccines and supposedly caused autism. Numerous investigations have proven that this is not the situation.

Recent laws might be helping the spread of measles. There are 19 states that have what are called “personal belief” exemptions. A parent can decide that based on their personal beliefs, they could decide not to get their children vaccinated. These personal exemptions in California, one of the 19 states, have tripled in growth from 2000 to 2010. The rates in rich communities have actually reached 84 percent. Outbreaks have happened in communities where there are high numbers of personal exemptions.

More measles outbreaks will happen in North America as long as the anti-vaccination movement continues to enjoy influence over some people.