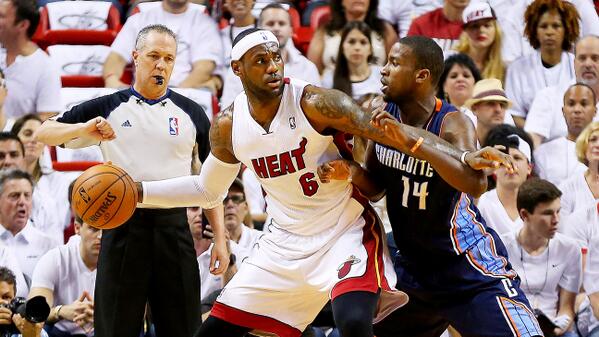 The Miami Heat have taken a commanding 3-0 lead, in what has been a hard fought series. Many expected this to be an easy sweep for the Heat. However, that has not been the case since Game One. The Bobcats have given the Heat a run for their money. This game began like the others, with the Bobcats jump ahead with the early lead.

The two time champs did not score a single point until 9:48 in the 1st quarter. Mario Chalmers broke the ice scoring the quick deuce off the assist from Udoins Haslem. The Heat appeared to be out of rhythm and that was due to their defense. The Bobcats had figured out a way to get Kemba Walker and Al Jefferson going early. The saving grace for over 10 minutes of that battle was Jefferson. It seemed he had channeled is inner Isiah Thomas from the 1988 finals. This big man was seemingly playing the entire game on one foot. He dominated scoring most of the teams point in the 1st quarter.

However, after a full timeout taken at 2:59 the game shifted in the Heats direction. Gary Neal fouled Chris Anderson right before the time out, and Anderson two free throws gave the Heat a one point lead. Then Anderson was fouled again and hit two more clutch free throws to put them ahead by two points. The seemed to be just enough fuel to get the team going, and they maintained the lead up until there was .55 seconds left in the first.

At the close of the first quarter Steve Clifford and Michael Jordan were satisfied with the Bobcats lead 27-23. The game was a grinder that went back and forth for a short period of the game.

Eventually, the Heat pulled away at 4:45 in the 2nd quarter, off a Chalmers three, and did not look back. The lead just grew larger and larger. By the end of the 3rd Heat were up 20 points 86-66. With the lead mounting the Bobcats appeared to be deflated, and the crowd was disengaged. There was little to cheer about. King James owned this team as he caught fire. James was determined to send a message. There was no better way than a no look dunk in the face of the Bobcats owner Michael Jordan. With a relentless will to win the Heat did prevail in the end 98-85.

Key Players For The Bobcats

Al Jefferson – He was the leader of this his team giving a resounding performance. Despite his injury. Jefferson scored 20 points, five rebounds, and three blocks.

Key Players For The Heat

LeBron James – James put the team on his back and single handedly kept his team alive. King James was using his skilled hands to direct and keep his team involved. He put up 30 points and 10 rebounds, along with six assists, and two steals.

-Bobcats have an inconsistency in their defense. They start off tough then it crumbles the moment the Heat applies pressure.

-Bobcats must identify a matchup to stop LeBron James, and minimize his activity in the paint.

-The Heat accrued 40 points in the paint; Josh McRoberts and Michael Kidd-Gilchrist need to step up their interior defense. Al Jefferson is not at his maximum vertical potential.

-Heat must find a way to establish their offense early, and not play catch up. They went scoreless for about four minutes to open the game.

-Heat cannot rely on the efforts of James to bail them out offensively.

-The Heat must establish a dominating factor off the bench. Their bench percentage has been significantly low.

Game Fpur will be a close game. Both teams will compete hard on both ends of the court. The Bobcats will strive to reduce the Heats points in the paint, and force the outside shots. The Heat will defend hard on Jefferson from the opening tip to make it difficult for him.

The Heat will win this game in the 4th quarter. It will be close, but they will pull away for the series sweep 4-0.