Michael Phelps Splashes out of Retirement 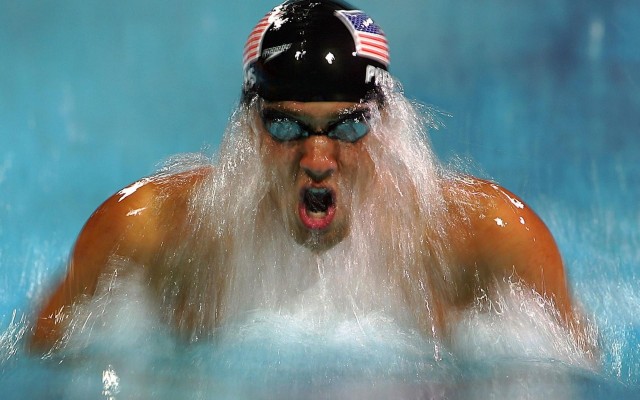 Michael Phelps has cannon balled back into the sports arena by abandoning his retirement this April.  Phelps will make his first splash out of retirement by competing in Mesa, Arizona at an Arena Grand Prix series swimming event April 24-26.  The coveted legendary Olympians return has rumor windmills spinning out of control as to what this foreshadows for 2016.

Will Phelps amphibious arms glide through Rio de Janeiro’s Olympic waters?  The ultimate first place champion dove right back into the anti-doping test program as well as a daily training regimen.  Unveiling small bread crumbs as to what the 28-year-old sensation actually has planned for the 2016 Rio de Janeiro Olympic games.  An exciting crumb contributing to this scenario is the lite spectrum of swimming events Phelps will uphold.

Bob Bowman, the coach all-time gold medalist record holder, stated Phelps is entered in the 100-meter butterfly, 100-meter freestyle, and the 50 free.  There is also a strong possibility that the Jack of all water trades will compete in the 50 butterfly as well.  The performance outcome of these particular events will determine what direction Phelps intends to head with his career.

Phelps performing in fewer less-strenuous races than at the height of his career will help assess his current capabilities.  Bowman has expressed that no matter how the human fish performs at this point, he cannot distort or tarnish his legacy.  It seems as though the master swimmer’s camp is laying groundwork in order to subside a certain performance.  This way if the performance is sub-par, the likelihood of disappointment arising can be minimized.  Athough, sub-par on the Phelps performance meter would be not breaking any of the five world-records he has already set.

Many extremely successful athletes have ventured down that winding retirement comeback path for the love of the sport.  It is a twisted road where passion and ability do not always line up, as they have in the past.  Mental drive hovers and hounds capability as age and in some cases allows neither to interfere with continued success. There are a multitude of professionals that have had their pre-retirement compared to their post-retirement achievements.

This is a gray area that spawns massive debate when discussing the likes of Floyd Mayweather, Brett Favre, Michael Jordan, Lance Armstrong, Allen Iverson, Michael Vick, Deion Sanders,  and Muhammad Ali just to name a few.  The arguable question posed is can they live up to their prior performances?  Michael Jordan is the mother of the best example that pin-points and describes this scenario.  He snatches three championships in a row and then retires for the first time.  This is in order to workout his family issues, come to terms with his Fathers death, and pursue other lifelong dreams.  After a year of retirement from basketball he returns and takes flight delivering another three championships.  At this point his skill set only seems to have flourished, prospered, and surpassed any human that threw on a pair of sneakers.  He retires again and comes back and this is when the Mount Vesuvius of jokes begin to erupt.  “Jordan that played for the Bulls or Jordan that played for Wizards?….Nobody wants Jordan that played for the Wizards.”

Phelps has endured a similar situation in taking time off to deal with personal events and pondering his true passion.  If Jordan is any indication of what the future holds, Phelps should be sure not to come out of retirement a second time.  The first time around Phelps will splash right out of retirement and into another plethora of gold medals.