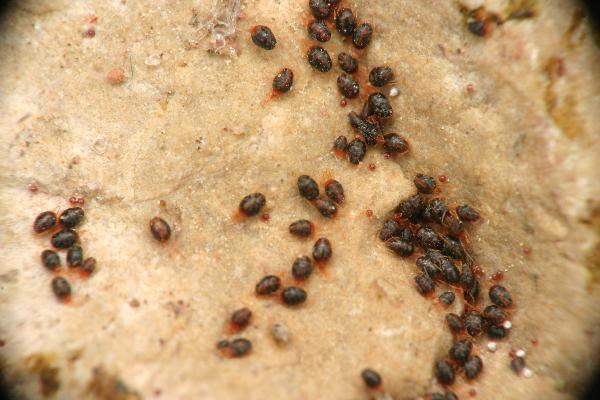 Move over, cheetah; another creature has just taken over the top spot for fastest land animal. Recent research says that the Southern California land mite now beats out the cheetah, who previously held the reigning title for years as the fastest land animal in the world. The  land mite not only beat the cheetah record, it far outran it. The little critter, no bigger than a sesame seed, and usually pretty hard to spot, can run 20 times faster than the cheetah. This is impressive considering that the cheetah’s top speed has been recorded at 60 miles an hour, or 16 body lengths.

Mites are a close relative of ticks, and this particular mite, the Paratarsotomus macropalpis, is native to Southern California, and was actually discovered back in 1916. However, not much is known about the creature’s habitat or eating and foraging habits.

The mite can run the equivalent speed of a person running 2,092 kilometers per hour, scientists now know. Researchers say that a human with the same running capacity could run about 1,300 miles per hour. The mite can also run up to 322 human body lengths per second. In addition to beating out the cheetah as the fastest land animal, the mite has also bumped down the Australian Tiger Beetle, who previously held the record for the most human body lengths run per second. The Australia Tiger Beetle can run 171 body lengths per second. Scientists say that their goal is to see if there is actually an upper limit in regards to relative speed when comparing animals. With the discovery of the mite and its speed, they say that they have yet to find that upper limit.

These findings about the Southern California mite were actually discovered by scientists quite by accident. During the course of other research, they were studying the muscular biochemistry and makeup of the legs of animals. In the process, they discovered that the mite could potentially beat out the Cheetah as the fastest land animal based upon the mite’s anatomy. According to researchers, the existence of muscles in a leg could actually hinder an animal’s ability to travel more swiftly and lightly than its counterparts without leg muscles, such as the mite. This accounts for the fact that the smaller the size of an animal, the faster they usually are. Research on the mites, once discovered, found that they were exceptionally good at stopping and changing directions, and that their tolerance for heat was impressive, to say the least.

The mites and their running speeds were recorded by researchers on high-speed video cameras. It was then determined that the mites had the ability to run on concrete surfaces that were heated up to 140 degrees Fahrenheit, or 60 degrees Celsius, a temperature which would kill most living organisms almost instantly.

This study by scientists on the muscular biochemistry of animal legs, along with the observation and conclusion that the mite now beats out the cheetah as the fastest land animal, was presented this past Sunday, April 27, at the Experimental Biology 2014 meeting.